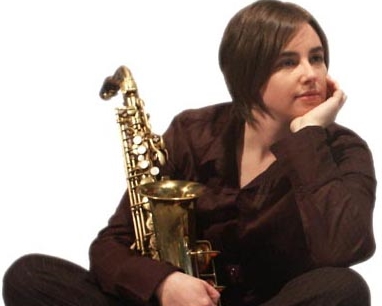 In Brief:
Usually trio but duo or larger line-ups available. Plays 2 hours over a 3 hour stay.
Add to My Enquiry List

“Cool” was a style of jazz that emerged in the 1950s and Allison takes her inspiration from a number of alto saxophone players who were at the forefront of this movement. Paul Desmond was one of these saxophonists and his tune Take Five, performed with pianist Dave Brubeck, became an international hit and one of the best known jazz compositions of all time. Allison’s tone bears a strong resemblance to Desmond’s floating sound – relaxed, cool but still swinging. Her repertoire also covers the same range of many hundreds of show tunes and “standards” along with bossa novas (such as The Girl From Ipanema). This is elegant jazz that is ideal to set the atmosphere for a drinks reception or cocktail party.

Allison’s youth disguises many years of first-rate playing experience. After her formative years playing alto in the Midland Youth Jazz Orchestra, she was flautist with the Britain’s world-famous National Youth Jazz Orchestra (NYJO) between 1996 and 1998. After completing a degree in performing arts at De Montfort University, Allison attended the Guildhall School of Music and Drama in London - generally recognised as the UK’s leading jazz school - where she attained a postgraduate diploma in jazz and studio music.

Allison is now pursuing a busy career on the jazz scene with her own combo and in other bands and projects. Her debut CD was released in early 2004 and has received airplay on BBC Radio and Jazz FM. Allison has performed at some of London’s top jazz nightspots including the 606 Club and the Pizza on the Park, and played at jazz festivals in Brecon, Coventry, Lichfield and Swanage. Her private function work has taken her to prestigious venues including Claridges, the Park Lane Hilton and the Grosvenor House Hotel.

The demo tracks feature Allison playing saxophone and flute with guitar, bass and drums. Our quoted price is for a trio of Allison, bass and either guitar or piano, but she can also appear as a duo or add drums to make a quartet. In all cases, the other members of the band are top musicians, who are leading players in their own rights. Allison normally plays for two hours over a three hour stay.

Travel and cost:
Allison Neale is based in London. See Pricing for details of travel costs, etc.
Add to My Enquiry List

"The 3 musicians are very talented and their music added to the ambience of the event."
Jenny Vyas - networking event - London - December 2012

"Very friendly, when having to start slightly earlier that planned were very helpful and responded straight away. Provided the perfect backdrop for the event."
Kelly Stewart - awards ceremony - London - June 2012

"Absolutely superb, both in quality of their performance and their professionalism."
Posey Furnish - Chief Executive's retirement party - London - October 2006

Got questions, or want to book 'Allison Neale' for your wedding, party or event? Add them to your Enquiry List and then send them a message to check their availability.
Add to My Enquiry List