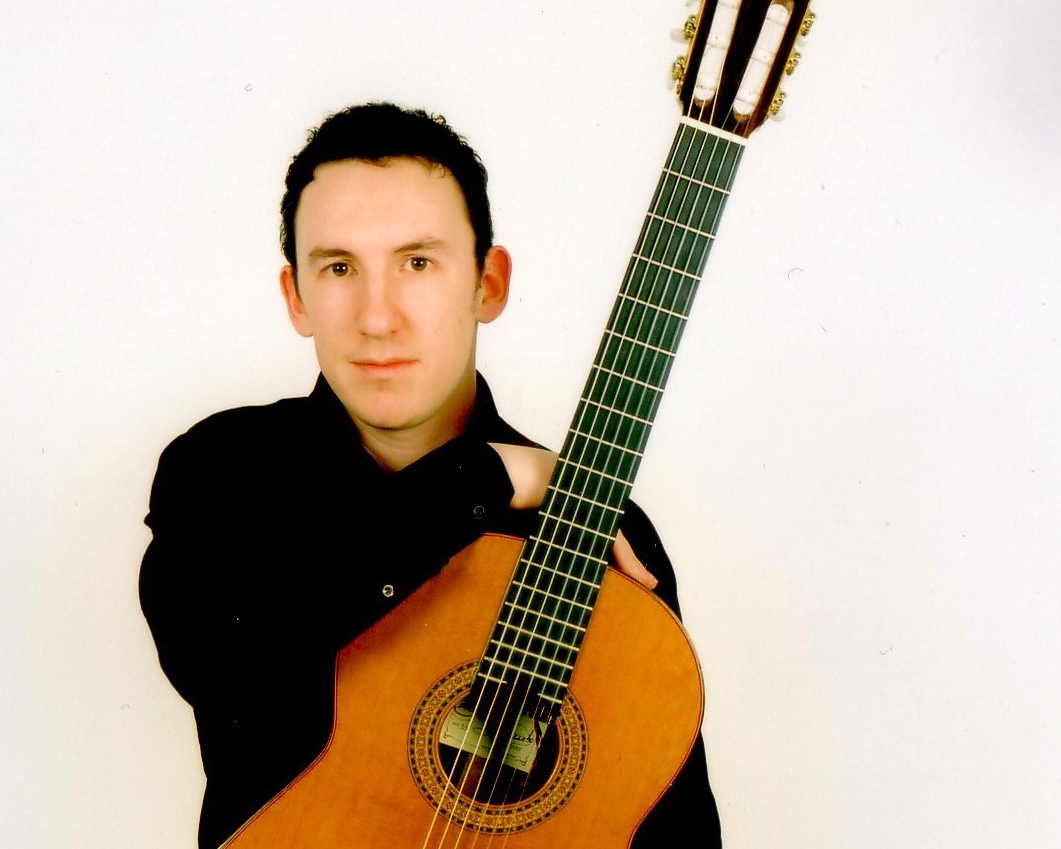 2 hours playing over a 3 hour stay.

Andrew George is a highly talented professional guitarist, specialising in providing beautiful music for every occasion, from subtle background music for private functions, to full concert performances. Andrew has a large repertoire and in addition, has the ability to perform on request almost any song, providing he has heard of it!

Andrew is an accomplished performer of many different guitar styles, including classical, romantic, Spanish, flamenco, Latin jazz, rock and pop. After winning several arts competitions, he gained a music scholarship with the Amersham & Wycombe Music Centre, and had reached the final for the regional Young Musician of the Year by the age of twelve. From this classical background, Andrewwent on to train at the University of Salford, gaining a degree in Popular Music and Recording.

At present, Andrew is in high demand both as a concert guitarist in the UK and Europe, and for private functions, such as weddings, dinners, parties and corporate events. He has undertaken live session work in the UK for musicals such as Grease, Joseph and The Best Little Whorehouse in Texas. He is also a highly respected guitar teacher at The Royal Masonic and St Clement Danes schools, as well as the Watford School of Music. Andrew usually performs for two hours over a three-hour period.

Pop/Rock - 1950 to 1999
A Thousand Years
Ain’t No Sunshine When She’s Gone
All You Need Is Love
Always On My Mind
And I Love Her
Angels
At Last
Bamboleo
Best Of My Love
Billy Jean
Blackbird
Bridge Over Troubled Water
Brown Eyed Girl
Can You Feel The Love Tonight
Careless Whisper
Cavatina (Theme from Deer Hunter)
Champagne Supernova
Chan Chan
Classical Gas
Crazy
Daniel
Danny Boy
Dock Of The Bay
Don’t Look Back In Anger
Don’t Cry For Me Argentina
Don’t Know Why
Endless Love
Eternal Flame
Everlong
Every Breath You Take
Everything I Do
Everywhere
Fast Car
Feelings
Fields Of Gold
First Day Of My Life
Fly Me To The Moon
Girl
Girl From Ipanema
Go Your Own Way
Godfather Theme
Guantanamera
Hallelujah
Happy Together
Have I Told You Lately
Help
Here Comes The Sun
Here There And Everywhere
Hey Jude
Hey Ya!
High And Dry
Hotel California
House Of The Rising Sun
How Deep Is Your Love
I Can See Clearly Now
I Don’t Want To Miss A Thing
I Heard It Through The Grape Vine
I Saw Her Standing There
I Say A Little Prayer
I Want to Know What Love Is
I’m Not In Love
If I Fell
In My Life
In The Air Tonight
Is This Love
Isn’t She Lovely
It Had To Be You
It Must Be Love
It Must Have Been Love
Jonny B Goode
Just The Two Of Us
Just The Way You Look Tonight
Karma Police
Killing Me Softly
Kiss From A Rose
La Bamba
Lately
Layla
Lean On Me
Let’s Stay Together
Lilac Wine
Love Letters
Love Me Tender
Loving You
Mas Que Nada
Money For Nothing
More Than Words
Mr Sandman
Mrs Robinson
My Heart Will Go On
Never Tear Us Apart
No Woman No Cry
Nothing Compares To You
Nothing’s Gonna Change My Love For You
One Love
Over The Rainbow
Power Of Love
Raindrops Keep Falling On My Head
Romeo And juliet
Roxanne
She
She’s Electric
She’s The One
Sit Down
Slide Away
Someone To Watch Over Me
Something in The Way She Moves
Son Of A Preacher Man
Stairway To Heaven
Stuck On You
Sultans Of Swing
Summertime
Sunny Afternoon
Sunshine Of My Life
Sween Child O’ Mine
Sweet Caroline
Sweet Home Alabama
Tears In Heaven
That’s Amore
The First Time Ever I Saw Your Face
The Way You Look Tonight
The Winner Takes It All
There Is A Light That Never Goes Out
There She Goes
Three Times A Lady
Til There Was You
Time After Time
To Bring You My Love
Unchained Melody
Under The bridge
Volare
What The World Needs Now
When A Man Loves A Woman
When I Fall In Love
Whiter shade of pale
Wish You Were Here
Woman
Wonderful Tonight
Wonderful World
Wonderwall
Wouldn’t It Be Nice
Yesterday
You And Me Song
You Do Something To Me
You Really Got Me
You’re Still The One
Your Song

Andrew George is based in Hertfordshire. See Pricing for details of travel costs, etc.

"Andrew was more than we expected, he was completely professional and went above and beyond what I expect are usual services, we would book Andrew again at the drop of a hat."
Paul Jones - wedding reception - Kent

"Andrew was fantastic and made our wedding day perfect. He was very adaptable and played inside and out. I would definitely recommend him to others and use Function Junction again."
Sian Griffiths - wedding reception - Buckinghamshire

"We had a lot of comments from guests on Andrew's playing. He was excellent. Only wish we had more time to listen."
Graham Rowe - wedding reception - Surrey

"I was impressed with the service from Function Junction - everything was very clear, straight forward, courteous and friendly. Andrew was fantastic and really created a lovely atmosphere at the reception (although the amazing sunshine we had on the day helped!) He played exactly the sort of music we wanted, and was well presented. I would definitely recommend him and Function Junction to anyone looking for live music"
Christina Dooley - wedding reception - London

"Andrew played everything we requested. I would recommend Andrew to all my friends/work colleagues! So many people commented on Andrew and said how wonderful we was. The biggest highlight was our first dance played by Mike ‘It must be Love’ - thanks Andrew!"
Lucy Weston - wedding reception - Essex

"Thanks to Andrew for playing so beautifully at the wedding – I’m so pleased that we booked him – much better than a harp!"
Mrs Caroline O’Reilly - wedding reception

"Thank you so very much for playing so beautifully at our wedding. Everybody commented on how well you played and at what a special atmosphere your music gave to the ceremony. I am only sorry I wasn't in the room to hear more, but I really enjoyed the pieces you played during the signing of the register and especially appreciate you taking the time to learn Here Comes The Sun. It really wouldn't have been half as nice without you there and we are so pleased that you were! I very much hope that we will have the opportunity to hire you again in the future and until then send you all best wishes and many many thanks again"
Mrs C - wedding ceremony

Got questions, or want to book 'Andrew George' for your wedding, party or event? Add them to your Enquiry List and then send them a message to check their availability.
Add to My Enquiry List