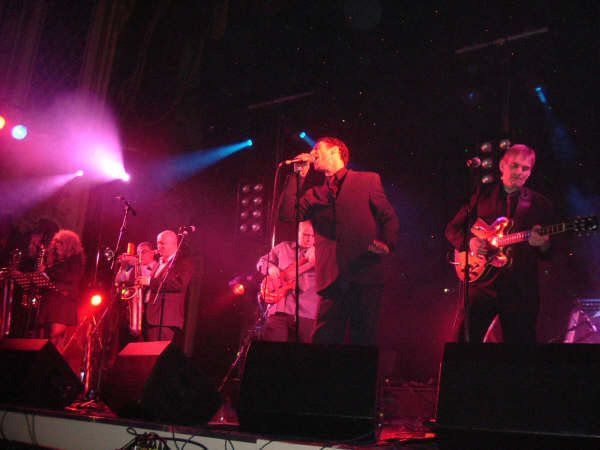 This Manchester-based band is one of the hottest soul/funk outfits in the country. With an eight-piece line up of drums, bass, guitar, keyboards, male vocalist and sparkling brass section, Atlanta Soul play classic hits made famous by artists such as James Brown, Van Morrison, Marvin Gaye, Stevie Wonder and The Commitments.

The band have performed at numerous venues from the Band on the Wall to the Queen Elizabeth Hall, Manchester, and at the Heineken Music Festival, Roundhay Park, Leeds they played in front of 70,000 people appearing alongside Mike and the Mechanics, Big Country, Squeeze, Desmond Dekker, Siouxsie and the Banshees, Aswad and Midge Ure.

As well as live concerts, the band have also played at weddings, private parties and corporate events in such prestigious settings at Hampton Court Palace, the Birmingham NEC, Tatton Park, the Midland and Piccadilly hotels in Manchester and the Grosvenor House in London.

The band normally play for between two and two-and-a-half hours, divided into two or three sets. They bring their own full PA and lighting systems and can also play taped 60s to 90s music through their sound system before, in between and during breaks in their performance to create an evening of varied musical entertainment.

Travel and cost:
The Atlanta Soul Band are Manchester-based. See Pricing for details of travel costs, etc
Add to My Enquiry List

"We are already booking them for our next 2 functions!"
Dana Bush - Company 5th Birthday Party - Morton - June 2007

"The Atlanta Soul Band were amazing! Need I say more! the chosen music was just right for all age groups there and immediately when they started everyone danced right until the end... We had the most wondeful time. Thank you."
Katie Hollinrake - wedding reception - Yorkshire - September 2006

"A really big thanks to everyone in the band. They all performed brilliantly and everyone at the wedding thoroughly enjoyed them especially us !!"
Gary Kirk - wedding reception - Lancashire - June 2006

"Thank you for helping us have an awesome party. We apologise for the delay in getting started and appreciated so much that you still did your full set and encore too. Also many thanks for letting Ulrik play with you guys. You absolutely owned the stage and us - we had endless comments from our guests how good you were and I think that the constantly full dance floor spoke for itself."
Jonna Sandstr0m - 40th birthday party - Nottingham - May 2006

"So many guests commented on how brilliant they were. They gave it so much energy and obviously really cared about us having a good time - as we did - fantastic! They were the best possible choice and I would highly recommend them"
Helen Chamberlain - wedding reception - Powys - December 2005

"“Absolutely Fantastic job. All of guests thought Atlanta Soul Band was great. We are pleased with the quality and would recommend Atlanta Soul Band & Function Junction anytime - with conviction!”"
Roy Wogelius - wedding reception - Cheshire - May 2005

"They are absolutely amazing - far too good to be playing at weddings! The best function band I've heard .... ever!"
Mark Guerin - wedding - Herefordshire - September 2004

"The band exceeded expectations! All of my guests have not stopped talking about how great the band were. One couple even asked me if I knew where they'd be playing next! I'd recommend the band and am trying to find an excuse to host another party at which they can play. Excellent!!"
Emma Brookes - wedding - South Yorkshire - July 2004

"The whole service was of high quality, definitely great professionalism. The band contributed to our night thanks a million."
Melville Desouza - wedding - Cheshire - June 2004

"We had a wonderful day … and The Atlanta Soul Band played a big part in it. Our great thanks go to you and them for helping to make our wedding so memorable."
Andy Dixon - wedding - Hampshire - May 2002

"The band were excellent and many of our guests commented on their great performance – many thanks for helping to make our day so special and memorable!"
Gina Reveglia - wedding - Cheshire - November 2001

"Everyone said they are the best band they had heard live!!"
Ben Smith - wedding - West Yorkshire - October 2001

Got questions, or want to book 'Atlanta Soul Band' for your wedding, party or event? Add them to your Enquiry List and then send them a message to check their availability.
Add to My Enquiry List