The Fab Four down to every detail. This Beatles tribute authentically recreates the sound, the look, and the humour.

This band are regarded as the top live Beatles tribute by many in the entertainment industry, not just in the UK but also abroad. They have performed extensively throughout the world, performing in New York, Hong Kong, South Africa (three tours to date) Syria, Dubai, Egypt, Morocco and all over Europe. They have performed over 1,000 shows including many theatre venues in the UK plus corporate, student union and private performances.

The band’s show is a true and accurate reproduction of the timeless classics the Beatles penned, and covers many of their world-renowned hits. With identical guitars, amplifiers, drums and haircuts the bandits not only reproduce the identical sound of the Beatles, but also the look. This covers both the original Beatle-suited “She Loves You” style from their early hits, to the Sergeant Pepper uniforms and droopy moustaches of the late 60s and beyond.

Beyond the costumes and equipment, these musicians complete their act with examples of John Lennon's dry wit and cheeky Scouse remarks, and the playful interaction between the band members. Undoubtedly this is a show for all ages and for any event or occasion.

Travel and cost:
This Beatles Tribute band is based in south Wales. See Pricing for details of travel costs, etc

"The band was perfect, the party brilliant and the dance floor never empty. From the frist notes played I, personally, never left the dance floor. I didn't want to miss a single minute! My eighty-five year old mum danced all evening (albeit very sedately). We have had nothing but good comments regarding the band and everyone knew the words!!"
Carol MacDonald - 60th birthday party - Hampshire 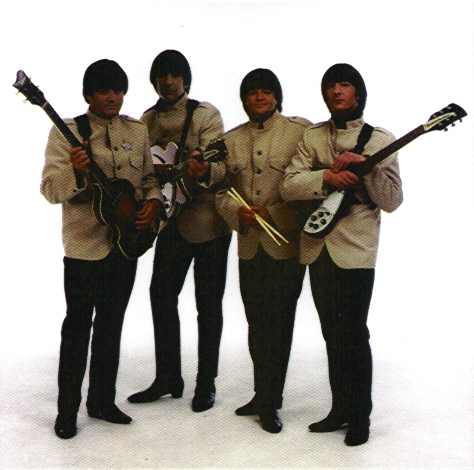 Songs List:
Twist & Shout
I Should Have Known Better
I'll Be Back
Eight Days A Week
Hard Days Night
Yesterday
She Loves You
I Want To Hold Your Hand
Can't Buy Me Love, Help
I Saw Her Standing There
Here Comes The Sun
Yellow Submarine
I Am The Walrus
All You Need Is Love
Back In The USSR
Come Together
Day Tripper
Get Back