The Charleston Chasers are firmly established as one of Europe’s leading dance bands specialising in the jazz age music of the 20s and 30s. Their inspiration is that group of songwriters, band leaders and arrangers who made jazz the pop music of its time, music that is still great entertainment and able to bring wit, sophistication and joie de vivre to events of all kinds.

Rather than just being a tired pastiche, The Chasers are marked out from the crowd by their brilliant and original arrangements of familiar classics along with a knack for finding less well-known gems from forgotten musicals. In the same way that the pre-war British bands of Roy Fox, Henry Hall and Jack Hylton brought their own sound to the music being pioneered in America by the likes of Fletcher Henderson, Paul Whiteman and Duke Ellington, The Chasers’ unique arrangements and superb musicianship give them an authentic voice, capturing the spirit of the original bands without slavishly copying them.

Since their establishment in 1987, the band have played at festivals and concerts around the UK and abroad. The band are regulars on BBC radio and frequently worked in collaboration with veteran broadcaster the late David Jacobs, who described them as “one of the finest bands around today”. As well as catering for the concert-going aficionados, the band is equally at home providing the entertainment at parties and functions of all kinds, including weddings, corporate events, balls and charity galas, where the band’s blend of fun and musicianship always proves immensely popular with younger audiences.

The band’s ten-piece line-up consists of two trumpets, trombone, three reeds (clarinets/saxophones), guitar/banjo, string bass/sousaphone, piano and percussion. Vocals are shared between five of the above, enabling the band to perform some appealing vocal harmonisations. At private functions the band will expect to perform for three 45 minute sets. For smaller venues, the band can provide its own small vocal PA system, which is included in the price. For larger events, additional PA will be required, which can be quoted separately.

Travel and cost:
The Charleston Chasers are based in Gloucestershire and London. See Pricing for details of travel costs, etc.

"The band were delightful to deal with and the music was excellent - very happy."
Vicky Goode - corporate event - Cheshire 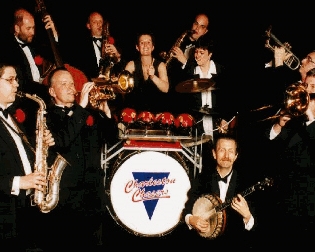