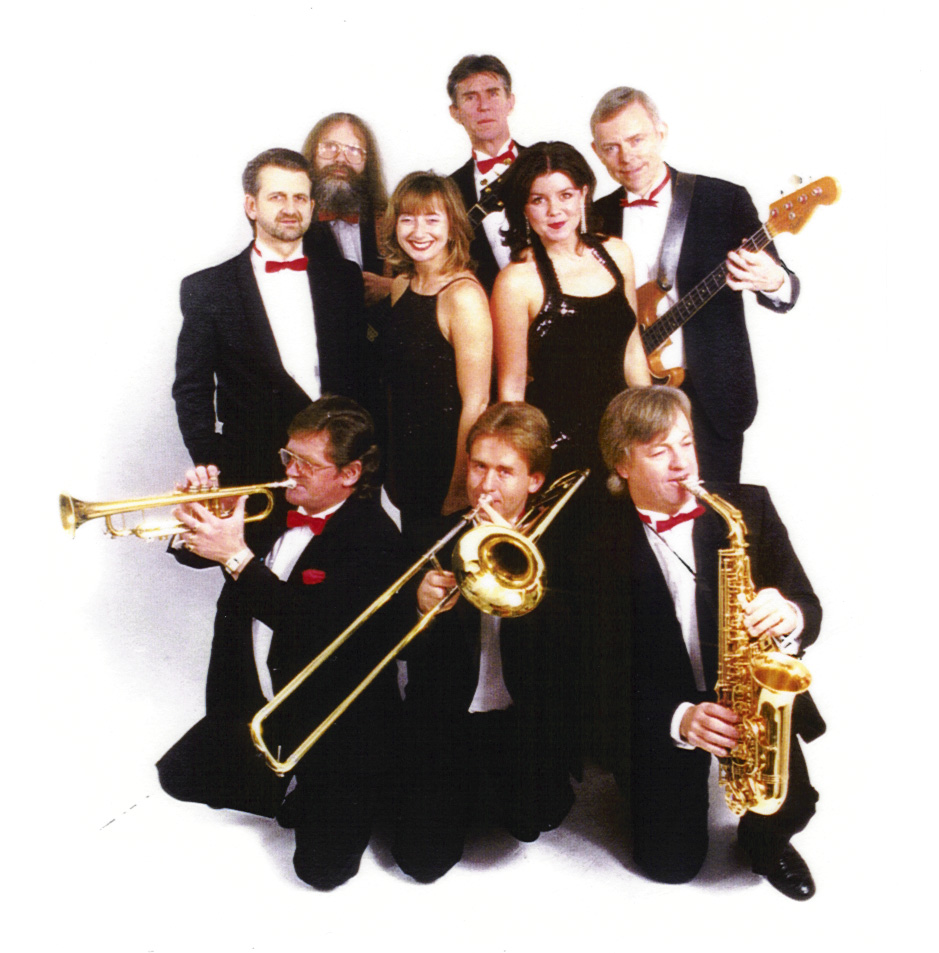 With a repertoire spanning pop, soul, swing, jazz and dance music, Contrast is a top quality function band, which can run from a six-piece to ten-piece line-up. The original Contrast was formed in 1982 by three of its current members, when they served together in the Band of the Royal Marines aboard the Royal Yacht Britannia. Since leaving the Royal Marines in 1987, the band has been augmented with additional professional musicians and female vocalists to become the versatile and impressive group it is today.

Our recordings of Contrast feature the nine-piece band, but give a good idea of the sound of the smaller and larger line-ups. Our pricing for the band is based on the six-piece line-up of keyboards, bass, drums, trombone, female vocalist and a choice of guitar, saxophone or trumpet.

The band’s line-up and professionalism mean that it can authentically re-create a wide range of musical styles. These include Glen Miller swing, chart hits of the sixties through to the nineties, and a wide variety of dance music from foxtrots to jive.

With its versatile line-up and wide repertoire, Contrast has played at weddings, balls, parties, Bar Mitzvahs, corporate events and other engagements, mainly around the south of England, where the band is based. The band usually plays for around two hours and brings its own high quality PA and lighting systems. CDs or tapes can be played through the PA system during the band’s breaks.

Read More
Songs List:
The repertoire will partly depend on the size and line-up of the band.

Other Pops
1-2-3; 5-6-7-8; Abba – Medley; Baby One More Time; Barbie Girl; Believe; Best Years ; Blame It On The Boogie; Cotton Eye Joe; Dance The Night Away; Dancing Queen; Everybody Salsa; Go Away (Estefan); Horny!; Hot Hot Hot; Hot Stuff; I Am What I Am; I Feel The Earth, Move; I Got You (I Feel Good); I Wanna Dance With Somebody; I Will Survive; I’m So Excited; Livin’ La Vida Loca; Mambo No 5; Mustang Sally; Pink Cadillac; Samba De Janeiro; Saturday Night; Simply The Best; Stop!; Tragedy; Walkin’ On Sunshine; YMCA/In The Navy; You Sexy Thing; You’re The One That I Want

Slower
Angels(In A Girl Key!); Anything For You; Everything I Do; First Time Ever I Saw Your Face; From This Moment On; Get Here If You Can; Have I Told You Lately; Hello Again; How Deep Is Your Love; I Don’t Wanna Lose You; I’ll Always Love You; I’m Falling Into You; Lady In Red; Let There Be Love; Let’s Stay Together; Love Is All Around; My Heart Will Go On – Titanic; No Matter What; Perfect Day; Perfect Moment; Perfect; She!; Show Me Heaven; Stand By Me; Think Twice; Unchained Melody; We Have All The Time In The World; When You Tell Me That You Love Me; Wind Beneath My Wings; Wonderful Tonight; Wonderful World; You’re Still The One

The band’s repertoire also includes a selection of Glen Miller tunes and various quicksteps, foxtrots and waltzes, barn dances, Veleta, Gay Gordon, cha-cha, tango, rhumba etc. This is just a selection of the most popular songs and styles frequently requested at functions - more specific requests for a particular favourite can be catered for, given enough preparation time.

Travel and cost:
Contrast are based in Hampshire. See Pricing for details of travel costs, etc
Add to My Enquiry List

"Not only was the music perfect, but you were extremely professional."
Harveys of Bristol

"Contrast proved to be a huge success, their repertoire was so varied."
Grand Metropolitan

"Such excellent music, the dance floor was full the whole time."
EuroConvex

Got questions, or want to book 'Contrast' for your wedding, party or event? Add them to your Enquiry List and then send them a message to check their availability.
Add to My Enquiry List