Crazy Eyes are an energetic five-piece band performing pop, rock and soul classics from the 70s to 2000s, with a bit of rock'n'roll thrown in for good measure! From Dead or Alive to Dizee Rascal, Bon Jovi to Black Eyed Peas and Aha to the Arctic Monkeys the band's eclectic repertoire will fill the dance floor in seconds! Featuring male lead vocals, guitar/vocals, bass guitar/vocals, keyboards and drums, all band members are professional session musicians who have toured or been in projects with some of the top musicians in the country including Jamiroquai, Van Morrison, M People, Peter Gabriel, Nelly Furtado and Robbie Williams's backing bands Phoenix and Two Door Cinema Club.

Between them they have toured in Japan, China, USA, Australia, Mexico and throughout Europe. Festival appearances for the band members include Glastonbury, Reading, Leeds, T in the Park, I Tunes, Oxegen (Ireland), Summersonic (Japan), Splendour in the Grass (Australia), Bennicassim (Spain), Melt (Germany) and Corona Capital (Mexico). You might well have seen a band member on TV too as their credits include Later With Jools Holland, Le Grande Journal (Paris), Jimmy Kimmel (LA, USA) and The Late Late Show (Dublin).

Crazy Eyes provide a full PA and lighting rig with a dedicated sound engineer to make sure everything runs smoothly. A DJ is also available to hire for £220.00 or alternatively the band can supply recorded music in their breaks free of charge. A sax and trumpet can also be added to the band for an additional fee.

Crazy Eyes perform three 40-minute or two one-hour live sets. For £125 an hour the band's pianist can also play mellow jazz standards at the drinks reception and wedding breakfast, or you can have the full band do this for £250.00 an hour.

Travel and cost:
Crazy Eyes are Sussex -based. See Pricing for details of travel costs, etc

"The band were very efficient and professional in all the arrangements beforehand. On the night, the energy of the band was electric, pulling even the shyest wallflowers off the walls and onto the dancefloor. This turned our event from good to fabulous, with a vibrant selection of brilliant music that really engaged all the people at the party. I would recommend the band for any kind of event."
Emma Law - corporate Christmas party - West Sussex - December 2010

"The band were indeed AWESOME; cannot praise them highly enough. They had everyone from 15 to 50 on the floor with a great mix of songs; well played and well sung. All our guests have had great things to say about them when passing on their thanks for the party. From an organizational point of view they were a dream to have…I'd have them again for sure if we were doing it again and would recommend them wholeheartedly to anyone wanting a band at a party. I wouldn't change a thing about them."
Nicki Williams - birthday party - Berkshire - June 2010

"Thank you all so much for the fantastic music at Mary (my baby sister!)"
Lorna Adams - wedding reception - West Sussex - May 2010 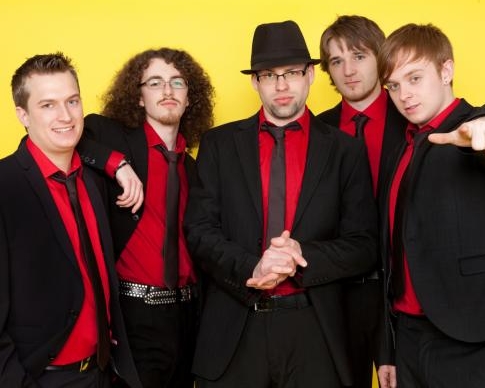