Don Steele specialises in the “traditional” jazz, championed in the UK by bands such as Kenny Ball, Alex Welsh and Chris Barber. The band’s repertoire of over 400 tunes covers all the classics of New Orleans, and the riverboat jazz which took the music up the Mississippi to St Louis and beyond. The band features Don on trumpet with the other three band members on saxophone/clarinet, banjo and sousaphone. This line-up is completely acoustic and completely mobile making it perfect for garden parties and other outdoor events. This versatility has also made the band a popular feature at indoor venues where the band needs to move around or set up quickly, such as the London Transport Museum, where the band regularly appears on the top deck of a vintage bus!

Our quoted price is for the four-piece band, but the band can go up to five or six pieces by including drummer and trombone. They can also provide a trio (Don with piano or guitar and bass) playing “smoother” swing-style jazz more suitable for providing relaxed background music at receptions and cocktail parties. The band would expect to stay for up to four hours at an engagement, during which time they would play for around three hours. A longer booking can also be arranged.

Don and his co-members are all highly experienced jazz musicians and the band has played at top venues in London and further afield, including The Dorchester, The Café Royal and The Ritz. They have provided the entertainment at numerous weddings, parties and corporate functions and have played at Henley Regatta, the American Embassy in London and the Australian High Commission.

For larger events, the band can provide a full PA system (included in the price) and for a small extra charge can also play CDs during their breaks.

Don Steele is based in Kent. See Pricing for details of travel costs, etc.

"Lovely chaps, fabulous music, everyone loved them. I can't rate them highly enough. I want their CD! And for them to play at every party I have from now on."
Christine Drew - wedding reception - Buckinghamshire - May 2015

"The Don Steele Quartet were absolutely fantastic. They were the perfect addition to our garden wedding. They were helpful polite and felt like part of the party! Everybody loved the music from the kids to the great grandparents."
Daniel Cooper - wedding reception - London - July 2013

"Don Steele were fabulous, really nice people and our guests loved the music. We really enjoyed the photos that we had with the band and the instruments. Thank you."
Emily Riddell - wedding reception - Berkshire - November 2011

"Many thanks to you and your colleagues for your efforts at the Clock Barn on Saturday. Your presence set exactly the right tone for the rest of the day and the garden party atmosphere which you helped to create was greatly appreciated by our guests. Thank you too for the Jeeves and Wooster number. Moreover, whilst you won't have known it your performance of "Pasadena" took me back 50-odd years; the Temperance Seven version was the first 45 rpm record I ever purchased !"
Peter Galloway - wedding ceremony and reception - Hampshire - August 2011

"We were delighted with the Don Steele Quartet. They provided excellent music for our party - just the right ambience - and were such a charming bunch of guys. Thank you!"
Claire Price - birthday party - Surrey - July 2011

"Don Steele were fantastic! They made a brilliant addition to the reception. They were friendly and professional. They were also very talented. They were complimented by many of the guests. We would recommend them and Function Junction to anyone."
Catherine McMillan - wedding reception - Kent - June 2011

"The band were highly professional and their performance was fabulous. They did exactly what they agreed – Function Junction were also very easy and professional to deal with. Thanks so much."
Louise Lee - wedding reception - Surrey - July 2009

"I would like to thank the Don Steele Quartet for their outstanding performance …. Their upbeat performance provided exactly the right soundtrack for what was a wonderful occasion. They had an open and friendly manner which added to everyone's enjoyment throughout the day. Please pass on our sincere thanks, and we will be happy to recommend them to anyone in future."
Julius Jakubowski - family day - RAF Lyneham - July 2009

"Thank you so much for the wonderful job that you did at our wedding …. Many guests commented on your sets and how much they enjoyed it. We were grateful for your organisation and professionalism as well as your talent!"
Kate and Carl Page - wedding reception - Warwickshire - May 2009

"We would like to say huge thank you to you and the band for your excellent performance at our wedding at Ashdown Park on the 1st of August . Ben and I were thrilled with the music, you helped to make our reception truly amazing. So many people commented on how fantastic you were, the music was exactly what we wanted to help to create the perfect atmosphere You were professional and efficient– just what we needed. We have recommended you to lots of people already and will continue to do so."
Jennie Wedge - wedding reception - East Sussex - August 2008

"The Don Steele Quartet were fantastic - really set the atmosphere for a lovely summer wedding. Thank you so much!!"
Kate Barraclough - wedding reception - Cambridgeshire - July 2008

"It rained most of the day, so the band came into the lovely barn. They played through the afternoon, and kept our guests happy and in the party mood. Guests remarked on the wonderful ambience provided by the music. The group were pleasant and adaptable to overcome the poor weather."
Shirley Hipkin - golden wedding pre-lunch reception - Berkshire - July 2007

"They were fantastic and very flexible. When it rained we all moved inside. Many of the guests commented on the calibre of the band and we would have no hesitation in recommending both the band and Function Junction to people. Many thanks."
Freyja Gilmore - wedding reception - Oxfordshire - August 2006

"Would recommend to anybody."
Richard Berry - birthday party - Essex - July 2006

"Thank you very much for playing so beautifully on our wedding day at Leeds Castle. Your band added a very special touch to proceedings during the ceremony and added brilliantly to the atmosphere on the balcony outside the Castle."
Steve and Sanaz Williams - wedding - Kent - 2003

"I am writing to thank you for putting on such an excellent set for my party on Saturday. It was faultless! So many people have commented on the quality of the music and how it really added to the whole feel of the evening. Really, I do not see how it could have been better."
John Townley - party - London - 2003

"…to thank you for a very special evening at the London Transport Museum, the Don Steele Jazz Quartet played to perfection and made the atmosphere brilliant."
Laura Morrison-Rees - Baker Tilley - London - November 2004

"They created a lovely atmosphere and were pleasant to have around."
Amanda Lecomber - wedding reception - Warwickshire - September 2005 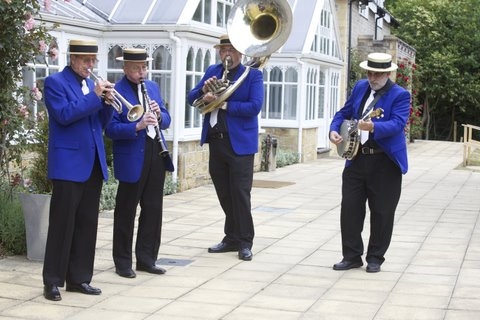