Quoted price is for 2½ hours playing spread over 3 hour period.

Formed in 1995 by Susan Fitz-Gerald (flute) and Elizabeth Elliott (harp), The Fitz-Elliott Duo offers an extensive and flexible repertoire for all occasions. This ranges from classical to jazz and also includes arrangements of today’s popular music.

Individually the duo members are talented and accomplished soloists, chamber and orchestral musicians. Susan Fitz-Gerald is a successful session musician working in TV and radio and also performing regular solo recitals at venues ranging from the Royal Festival Hall to 10 Downing Street. Elizabeth Elliott has performed at The Royal Albert Hall, The Barbican and The Royal Opera House and plays regularly with The Bournemouth Symphony Orchestra appearing with them on their live radio broadcasts and their CD recordings. She is also an accomplished musical arranger for music ranging from classical to jazz. This brings a unique depth to the duo’s repertoire.

The duo are regular performers at celebrity gala and charity events and private functions at top London venues including The Dorchester; The Hilton, Park Lane; The Café Royal; The Landmark, The Grosvenor, Hampton Court, Royal Ascot, Mansion House and Kensington Palace.

Our quoted price covers the duo playing for around two-and-a-half hours over a three-hour period, but a longer stay can also be arranged by negotiation. Where a piece of music is not already in their extensive repertoire they can also usually make a special arrangement although there may be an extra charge for this service.

The Fitz-Elliott Duo are based in Surrey. See Pricing for details of travel costs, etc.

"The duo were fantastic and played beautifully during the ceremony. We would definitely recommend to others."
Suzy Hunter - wedding reception - Hampshire - August 2009

"You were brilliant, played beautifully and enhanced the setting and atmosphere. I'd recommend Function Junction to anyone, very helpful and clear. Thanks"
Beth Morgan - wedding reception - Buckinghamshire - June 2008

"The Fitz-Elliott Duo were fantastic and a wonderful part of the wedding, enjoyed by everyone. We would be grateful if you could pass on our comments."
Sharmila Ratnam - wedding reception - London - June 2008

"We were absolutely delighted with the duo. They looked beautiful and played wonderful music. They totally lifted the ceremony to another level and their reception music created the perfect fun, yet relaxed atmosphere we were hoping to achieve. A very classy act who helped set the tone for the rest of the day."
Zickie Lim - wedding reception - Cambridgeshire - May 2008

"They played music requested by some of the guests who thoroughly enjoyed the music."
Julie Millbery - wedding reception - Hertfordshire - November 2007

"We loved their music and so did our guests. The girls were exceptionally nice and helpful. We'll definitely have them again…."
Jennifer Collins - wedding reception - Essex - April 2005 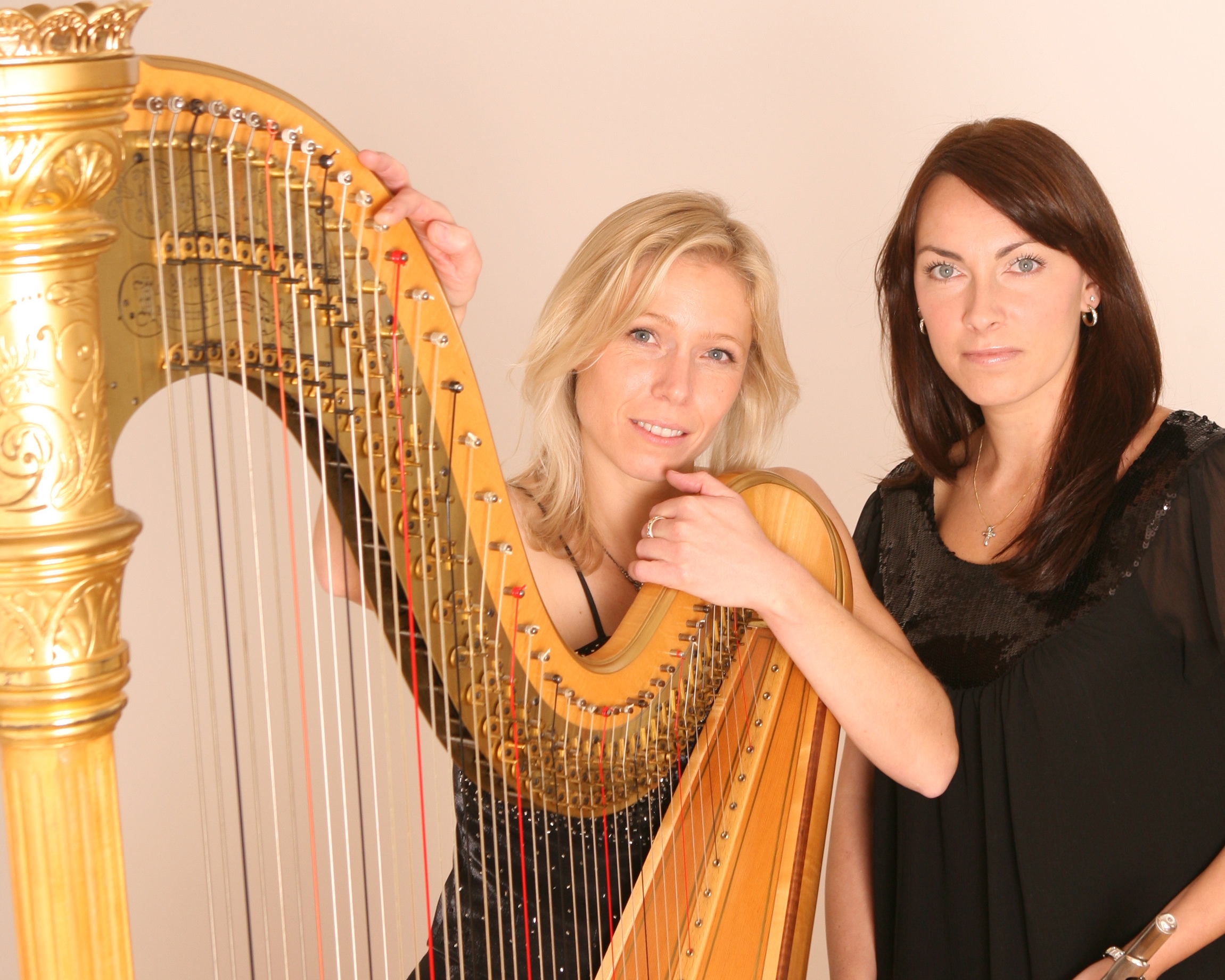 Popular
A Natural Woman (Aretha Franklin)
A Thousand Miles (Vanessa Carlton)
Ain’t No Sunshine (Bill Withers)
All I Have To Give (Backstreet Boys)
Almaz (Diana Ross)
Always (Bon Jovie)
Always And Forever (Luther Vandross)
Angels (Robbie Williams)
Annie’s Song (John Denver)
As Time Goes By (Frank Sinatra)
Autumn Leaves (Nat King Cole)
Baby Can I Hold You Tonight (Boyzone)
Beautiful (Christina Aguilera)
Beauty And The Beast (Celine Dion)
Because You Loved Me (Celine Dion)
Cavatina (Theme From The Deer Hunter)
Clocks (Coldplay)
Come Fly With Me (Frank Sinatra)
Crazy (Patsy Cline's)
Don’t Cry For Me, Argentina (Madonna)
Don’t Know Much (Aaron Neville)
Don’t Know Why (Norah Jones)
Don’t Let The Sun Go Down On Me (Elton John)
Dream A Little Dream Of Me (The Mamas & the Papas)
Embraceble You (George Gershwin)
Emotion (Destiny's Child )
Endless Love (Lionel Richie)
Eternal Flame (The Bangles)
Evergreen
Every Breath You Take (Police)
Feelings
Fields Of Gold (Eva Cassidy )
Fly Me To The Moon (Frank Sinatra)
Flying Without Wings (Wstlife)
Georgia On My Mind (Ray Charles)
Get Here (Oleta Adams)
Greatest Love Of All (Whitney Houston)
Have I Told You Lately, That I Love You (Van Morrison)
Have You Ever Really Loved A Woman (Bryan Adams)
Here And Now (Luther Vandross)
Hero (Carey)
Hero (Enrique Iglesias)
Home Blues
How Come You Don’t Call Me(Alicia Keys)
How Do I Live (Without You) (LeAnn Rimes)
How Wonderful You Are
I Could Have Danced All Night (My Fair Lady)
I Don’t Know How To Love Him (Sarah Brightman)
I Don’t Want To, Talk About It (Rod Swart)
I Get A Kick Out Of You (Frank Sinatra)
I Will Always Love You (Dolly Parton)
If
If Your Not The One (Daniel Bedingfield)
It Don’t Mean A Thing (If It Ain’t Got That Swing) (Duke Ellington)
Jesus To A Child (George Micheal)
Kiss From A Rose (Seal)
Lady In Red (Chris De Burgh)
License To Kill (Gladys Knight)
Love Story (Where Do I Begin) (Andy Williams)
Lullaby Of Birdland (Ella Fitzgerald)
Mad World (Tears for Fears)
Maria
Midnight Blue (Kenny Burrell)
Misty (Ella Fitzgerald)
Moon River (Andy Williams)
More Than Words (Westlife)
My Baby Just Cares For Me (Nina Simone)
My Heart Will Always Go On (Celine Dion)
Nightingale (Norah Jones)
Nobody Does It Better (Carly Simon)
One For My Baby (Fred Astaire)
Our Love Is Here To Stay (George Gershwin)
Out Of Reach (Gabrielle)
Perfect Day (Lou Reed)
Perfect Moment (Martine McCutcheon)
Promise Me (Beverley Craven)
Right Here Waiting (For You) (Bryan Adams)
Runaway (The Corrs)
Satin Doll (Duke Ellington)
Saving The Best Till Last (Vanessa Williams)
Send In The Clowns (Frank Sinatra)
Show Me Heaven (JESSICA ANDREWS)
Smoke Gets In Your Eyes (The Platters)
Someone To Watch Over Me (Nina Simone)
Sorry Seems To Be The Hardest Word (Elton John/Blue)
Starry, Starry Night (JOSH GROBAN)
Suddenly
Summertime (George Gershwin)
Swear It Again (Westlife)
Swinging Shepherds Blues (George Gershwin)
Take Five (Dave Brubeck)
Take My Breath Away (Berlin)
The First Time (Ever I Saw Your Face) (Roberta Flack)
The Girl From Ipanema (Stanley Gayetzky)
The Man I Love (George Gershwin)
The Music Of The Night (From Phantom Of The Opera)
The Sharp Of My Heart (Sting)
The Woman In Me (Shania Twain)
This Years Love (David Gray)
Time After Time (Eva Cassidy)
Tonight (Westlife)
Tonight I Celebrate My Love (Roberta Flack)
True Colours (Eva Cassidy)
Truly (Lionel Richie)
Try To Remember (Tom Jones)
Turn Me On (Norah Jones)
Unbreakable (Westlife)
Wade In The Water (Eva Cassidy)
We Have All The Time In The World (Louis Armstrong)
We’ve Got Tonight (Ronan Keating)
What A Wonderful World (Louis Armstrong)
When A Man Loves A Woman (Percy Sledge)
When I Fall In Love (Nat King Cole)
When I Need You
When You Say Nothing At All (Ronan Keating)
When You Tell Me That You Love Me (Diana Ross)
Wild Theme (Mark Knopfler)
Wind Beneath My Wings (Bette Midler)
With You I’m Born Again (Billy Preston & Syreeta)
Wonderful Tonight (Eric Clapton)
Yesterday (The Beatles)
You Only Live Twice (Nancy Sinatra)
Your Song (Elton John)

* These pieces are not allowed to be played during a Civil Ceremony.

The duo are also able to provide many more show tunes, Irish, Welsh and Scottish music and have an extensive Christmas repertoire ranging from traditional carols to the popular Christmas songs.