Grouper are a dynamic professional four-piece band playing contemporary and classic indie, rock and pop. All the musicians have played at the highest level in the music industry, having performed with artists including Tony Hadley (Spandau Ballet), ABC, Go West, Bruce Dickinson (Iron Maiden) and Roger Daltrey (The Who). The line-up consists of lead vocals, guitar, bass and drums and the band specialise in guitar-based hits spanning five decades from Travis to U2, Blur to Supergrass, Coldplay to Robbie Williams, The Beatles to The Stones and many more legendary groups. The band really take pride in capturing the spirit and energy of the original artists they are covering, ensuring that you will always hear the classic songs performed to their full effect, often described as 'just like the real thing'!

The band have a wealth of experience, having entertained audiences across the UK and Europe at a wide range of wedding venues and high profile corporate events since 2001. Recent clients have included Pearson Education, NSPCC, The British Army, Citigroup, OXO Tower Restaurant and Warwick University. The band have played at most of the major London hotels as well as stately homes and castles across the UK. They have performed at Disneyland Paris and recently at a large private party in Portugal.

Grouper have an extensive repertoire of rock and pop songs, and usually perform two one-hour 'live-wire' sets of music to entertain all ages. During the breaks between the live sets Grouper provide mixed party CDs, which they play through their high quality PA system. For an additional fee, the vocalist and guitarist are also available to perform an acoustic set earlier in the evening or during dinner if required.

"I would like to thank you and your band members for playing on Saturday night! It certainly made it a great 30th party. You guys got it just right for a smaller venue and had everyone on the dancefloor including the young and old! The song choices were great – Led Zeppelin went down really well, I didn’t need to encourage people onto the dancefloor but struggled to get them off! My guests were singing your praises the next day especially the mother of the young boy who was allowed to have a go on the drums during the break – he was in awe of you guys and it was really kind of you. You have been really friendly and professional and made it really easy for me – no stresses at all and I’m more than happy to recommend Grouper to my friends and family! Thanks again and hopefully see you again!"
Rachel - 30th Birthday - Brecon Beacons - September 2016

"The band were fantastic - everybody kept asking were I had found them and couldn't believe how good they were! The played exactly what I wanted and even let me sing my favourite song with them! Thank you, thank you, thank you!!"
Simon Curtis - wedding reception - Surrey - July 2006

"Everyone, including a number of musicians, thought the band was brilliant. I think it must have been obvious from the number of people who were dancing how well you all went down with the guests. The staff at the [venue] said that you were the most professional musicians that they had worked with. Please pass my thanks to the rest of the band."
David Hunter - daughter’s wedding reception - North Yorkshire - December 2005

"They were really fantastic, the adults loved them and so did the kids. A really brilliant performance."
Tina Tomlin - daughter’s birthday party - West Sussex - September 2004 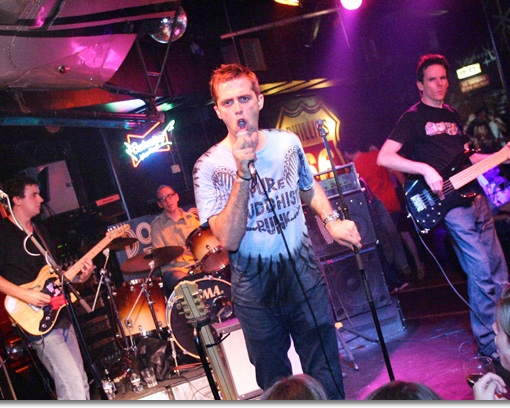