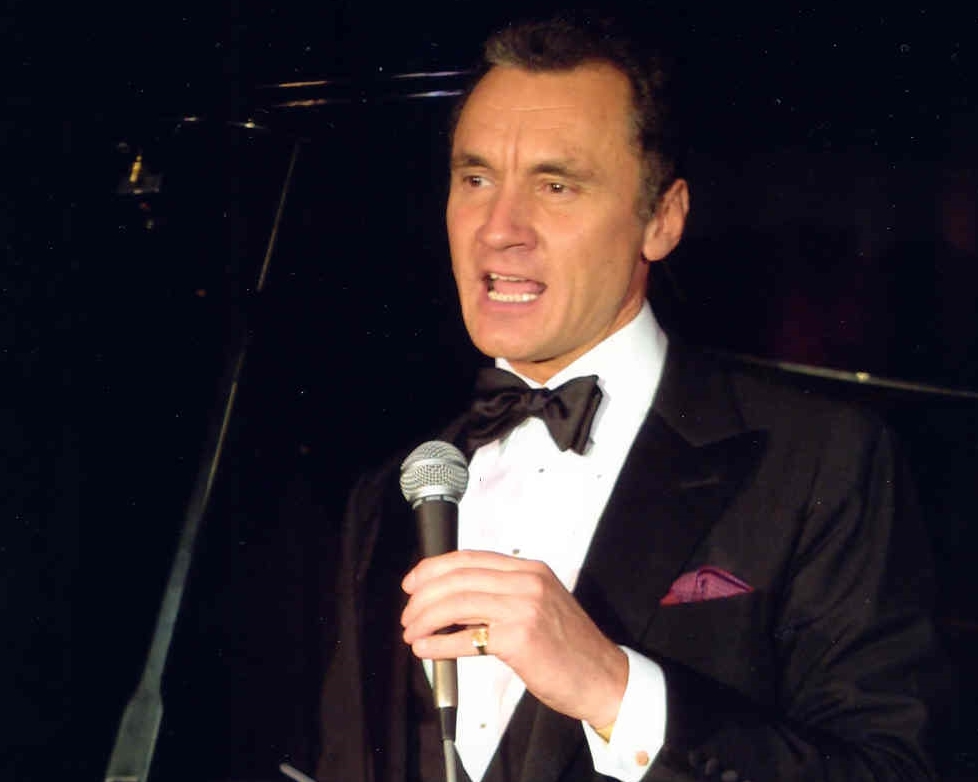 In Brief:
From duo with keyboard to full big band, 3x40 minutes or 2x1 hour sets, recorded music in breaks.
Add to My Enquiry List

Kevin O’Brien is now firmly established as one of the country’s leading exponents of Sinatra-style singing. Star of several ‘Tribute to Sinatra’ concerts, Kevin has performed at the Royal Festival Hall, London Palladium, Talk of the Town, Victoria Palace, and at London’s top ‘jazz rooms’ the Pizza on the Park and Pizza Express, Soho. He has also toured internationally, appearing at the Mint, Marina, Stardust, Dunes, Alexis Park, Sahara and Sands hotels in Las Vegas and at clubs and festivals in the States, Australia and Europe.

Kevin makes clear that he is not a Sinatra imitator, but his singing is a celebration of the genre – relaxed, swinging, sophisticated and stylish – drawing on the wonderful Sinatra repertoire of classic ‘standards’ and occasionally including some of his own tasteful compositions.

Kevin combines his touring and club appearances with performances at private functions including weddings, parties and corporate receptions, and he was booked through Function Junction a few years ago to provide the live music for Joan Collins’s wedding reception as featured in OK magazine. Joan rated his performance “excellent”!

Kevin is backed by top musicians, all of them British jazz ‘names’ in their own right. Our quoted price is for Kevin and a trio of piano, bass and drums, but he can also appear with a just a pianist or with a bigger group – even up to a full 17-piece big band. Kevin normally performs two 40-minute sets, but this can also be varied to suit the occasion.

Read More
Songs List:
A Fine Romance
A Foggy Day
A Nightingale Sang in Berkeley Square
A Time for Love
All of Me
All or Nothing at All
Almost Like Being in Love
Always
Angel Eyes
Anything Goes
April in Paris
Around the World
As Time Goes By
At Long Last Love
Autumn in New York
Autumn Leaves
Beautiful Friendship
Blue Moon
Body and Soul
Bridge over Troubled Water
Carnival (A Day in the Life of a Fool)
Change Partners
Come Dance With Me
Come Fly With Me
Come Rain or Come Shine
Day by Day
Day in, Day out
Dream
Easy to Love
Embraceable You
Emily
Evergreen
Everybody Loves Somebody
Five Minutes More
Fly Me to the Moon
Fools Rush In
From This Moment On
Get Ready
Goin’ Out of My Head
Gonna Sit Right Down and Write Myself a Letter
Happened in Monterey
Have You Met Miss Jones
How about You
How Deep is the Ocean
I Can't Believe That you're in Love with Me
I Concentrate on You
I Get a Kick Out of You ..
I Got it Bad and That Ain’t Good
I Left My Heart in San Francisco
I Love Paris
I Should Care
I Wanna Be Around
I'd Rather Leave While I'm in Love
If
If I Had You
I'll Be Seeing You
I'll Follow my Secret Heart
I'll Remember April
I'll See You Again
Imagination
Impossible Dream
It All Depends on You
It Might as well be Spring
It Never Entered My Mind
It's Only a Paper Moon
It's Too Late
I've Got a Crush on You
I've Got You Under my Skin
I've Heard That Song Before
Just Friends
Just in Time
Just the Way You Are
Laura
Let Me Try Again
Like Someone In Love
London by Night
Love is Here to Stay
Lover
Maybe This Time
Mean to Me
Meditation
Misty
Moonlight in Vermont
My Blue Heaven
My Foolish Heart
My Funny Valentine
My Kind of Girl
My Romance
My Way
Nancy with the Laughing Face
New York, New York
Nice and Easy
Night and Day
Old Devil Moon
On a Clear Day
On the Sunny Side of the Street
Pennies from Heaven
People
Please be Kind
Send in the Clowns
Sentimental Journey
September in the Rain
September Song
She's Funny That Way
Should I?
Softly As I Leave You
Someone to Watch Over Me
Spinning Wheel
S'posin'
Spring is Here
Stella by Starlight
Strangers in the Night
Tangerine
Teach me Tonight
That Old Black Magic
That Old Feeling
The Best is Yet to Come
The Girl from Ipanema
The Girl Next Door
The Good Life
The Impatient Years
The Lady is a Tramp
The Look of Love/Can't Take My Eyes off You
The More I See You
The Nearness of You
The Song is You
The Tender Trap
The Very Thought of You
The Way We Were
There Will Never Be Another You
They Can't Take That Away From Me
Time After Time
Too Marvelous for Words
Try a Little Tenderness
Wave
What Are You Doing the Rest of Your Life
What is this Thing Called Love
When You're Smiling
Where or When
Who Can I Turn To?
Without a Song
Wives and Lovers
You and the Night and the Music
You Brought a New Kind of Love to Me
You do Something to Me
You Do Something to Me
You Don't Have to Say You Love Me
You Go To My Head
You Make Me Feel So Young
You Stepped out of a Dream
You'd Be So Nice To Come Home To
You've Got a Friend
Read More
Add to My Enquiry List

Travel and cost:
Kevin O'Brien is based in London. See Pricing for details of travel costs, etc.
Add to My Enquiry List

"The band were great and everyone gave very positive feedback on the band and the music they played. Please thank Kevin for us"
Chris Yau - wedding reception - Surrey - June 2009

"Just a little note to say a very big thank you for the brilliant show you and your band put on for our wedding day ….. Everybody loved the music and we had so many compliments about you in the thank you letters. We have had a good look at the DVD and you really are super in it. Thank you also for taking the time to work with my singer friends. It meant so much to both of us and we really appreciate the extra work you did. I do hope to have the fortune to see you perform or book you again ..... perhaps my 40th?"
Laura and Mark Frey - wedding reception - Hertfordshire - May 2008

"Kevin and his pianist were great. They set the scene perfectly for our wedding."
Jonathan Bainbridge - wedding reception - Somerset - March 2007

"Excellent band, so many people commented on how good they were."
Louisa Hedley - wedding reception - Surrey - July 2005

"Kevin O’Brien and his musicians were absolutely wonderful, a highlight of the wedding reception. Many guests commented on how superb they were."
Fatima Cairrao - wedding reception - London - July 2004

"It has been a pleasure to deal with both Function Junction and Kevin O’Brien – many thanks to all."
Ros Abrahams - daughter's wedding - London - December 2002

"We were delighted with the standard of Kevin and the band – thanks."
Stephen Price - wedding - London - September 2002

"… a singer ‘a la Sinatra’ whose voice and charm created a most agreeable element to the evening."
Nice Matin, France

"Kevin O’Brien has a rich and vibrant voice, and his interpretation of a lyric always brings something fresh to a the classic songs while adding a grandeur to the new. A pleasure to see and hear."
Francesca Cappucci - ABC News, Los Angeles

"O’Brien, a classy entertainer from London, sings ballads as they should be sung, in a style similar to Vic Damone."
Las Vegas Review Journal

"Kevin O’Brien is the hottest male vocalist on the scene at the moment."
Jazz FM

Got questions, or want to book 'Kevin O'Brien' for your wedding, party or event? Add them to your Enquiry List and then send them a message to check their availability.
Add to My Enquiry List