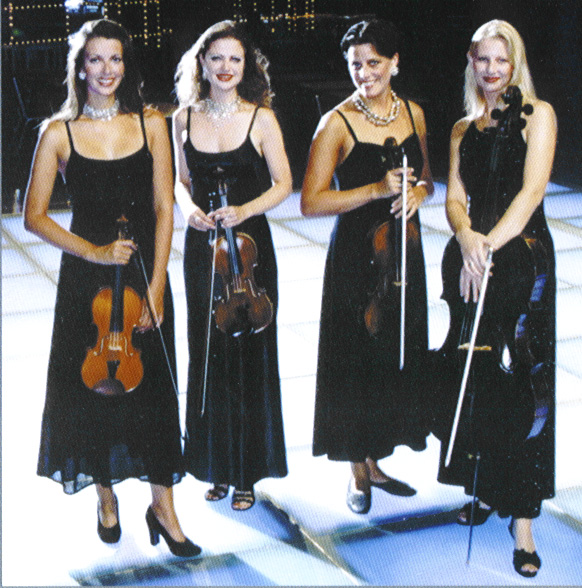 In Brief:
Quoted price is for quartet playing 2 hours over 3 hour stay. Trio also available at reduced price.
Add to My Enquiry List

About The Monaco String Quartet

Since studying at the Guildhall School of Music, the Monaco String Quartet have individually and together performed in numerous musical areas – from orchestras and various chamber engagements, to television appearances and live performances with well known popular artists. European engagements together with a multitude of private and corporate events in the London area ensure their growing popularity as one of the leading string quartets who guarantee to add an extra dimension to special events.

The Monaco String Quartet normally play for a total of two hours within a three hour period. They can also slim down to a trio for a reduced price. The Monaco is completely acoustic and so are able to play outside as long as they are provided with adequate shelter from rain, wind and sun, etc.

Saint-Saens
The Swan (Carnival Of The Animals)

Gershwin
The Man I Love, Somebody Loves Me
The Way You Look Tonight
Someone To Watch Over Me
He Loves And She Loves
I’ll Build A Stairway
A Foggy Day

Cole Porter
Let's Do It
Anything Goes

Homer
Theme From The Titanic

Travel and cost:
The Monaco String Quartet are based in the south east. See Pricing for details of travel costs, etc.
Add to My Enquiry List

"An absolute delight, everyone said how wonderful they were. Thank you so much!"
Laura Ohrman - wedding reception - Buckinghamshire - June 2015

"I just wanted to say a huge big thank you for being absolutely fantastic at our wedding ceremony … Please extend our thanks to the rest of the Monaco String Quartet. My mother and I were absolutely delighted with arrangement you put together for the Hamish Maccunn: Land of the Mountain & the Flood. It certainly brought a tear or two to her eyes! Everyone has said how fantastic you were and they were most impressed that you set up and played in the courtyard too. I'm sorry I did not get a chance to speak to you all and thank you properly in person. I think I was carried away in the moment! "
Jacqui Dundas - wedding ceremony - London - August 2014

"The Monaco String Quarter provided exactly the sort of entertainment I had envisaged. Superb live music that was neither intrusive or repetitive. The quartet were a pleasure to work with and I would be happy to use them again."
Rajiv Varma - coporate event - Essex - September 2012

"The Monaco String Quartet were a fabulous accompaniment to our wedding reception, gave a great ambience. Classy look and sound, people loved the mix of contemporary and classical. We would highly recommend them."
Stephen Tucker - wedding reception - Surrey - August 2011

"The trio were perfect - extremely accommodating of the venue (not sure I would have been brave enough to play from the balcony!). I have two friends who have asked for their details for next year!"
Kate Mustoe - wedding reception - Hampshire - November 2010

"We were delighted with both acts, would you please pass on our heartfelt thanks to them for making our day so spectacular"
Adam Brown - wedding reception - Berkshire - March 2010

"I'd like to thank The Monaco String Quartet for making our day that more special! They were fantastic and I would certainly be glad to recommend them to any bride and groom! Thank you!"
Sam Armstrong - wedding reception - Essex - August 2009

"All our guests loved having the string quartet playing and had plenty of great comments about the music and the Monaco String Quartet."
Sadie Bradley - wedding reception - Cambridgeshire - August 2009

"Monaco String Quartet were fantastic. The music was beautiful and the girls were lovely, friendly and polite. They were very willing to play a piece of music with a member of our family during the service. Please pass on our thanks to them. They were wonderful and made the day perfect for us."
Sara Hull - wedding reception - Croydon - July 2005

"The Monaco String Quartet were absolutely fantastic – and helped to make our day so special."
Emma Levene - wedding - Surrey - 2002

Got questions, or want to book 'The Monaco String Quartet' for your wedding, party or event? Add them to your Enquiry List and then send them a message to check their availability.
Add to My Enquiry List