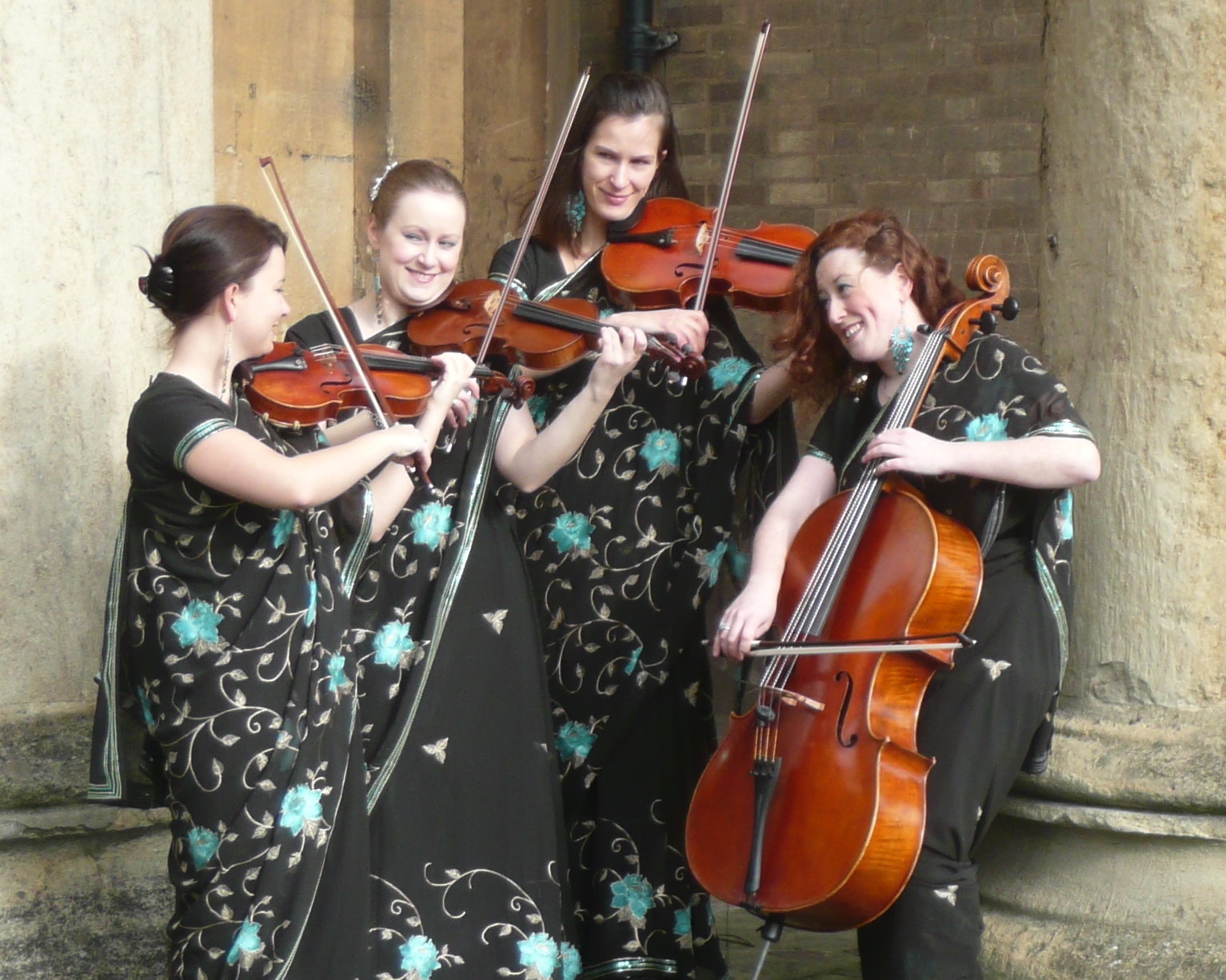 2 hours playing over a 3 hour stay.

About The Nero String Quartet

The members of The Nero String Quartet met whilst studying at the Birmingham Conservatoire. Finding a musical meeting of minds, they formed the quartet in 2001 and have rapidly built up a reputation as one of the leading young quartets in the Midlands.

Their musical excellence and that essential ingredient - an instinctive rapport between the quartet members - is the result of much hard work. As well as studying at Birmingham with members of the Maggini and Coull quartets, they have also attended masterclasses provided by The Endellion Quartet, The Lindsay Quartet, The Schubert Ensemble, The Allegri Quartet, The Volger Quartet, The Vanburgh Quartet and have also taken part in a bursary course with Michael Bochmann and The Carducci and Maggini String Quartets. The fruits of their hard work were formally recognised in 2003 when they won first prize in the Sylvia Cleaver Chamber Music competition and were also awarded The Derek Young Memorial Award.

Apart from their classical recital work they have a wide repertoire of lighter music, suitable for weddings and private functions.

Popular
Abba Mamma Mia
Abba Money
Money Money
Abba Winner Takes It All
Aerosmith I don’t want to miss a thing
Anon Ain’t she sweet
Anon I can’t give you anything but love
Anon Bring me sunshine
Arlen Over the rainbow
Bart As Long as he needs me
Bart Consider Yourself
Bart Where is love
Beatles And I Love Her
Beatles A Hard Day’s Night
Beatles All you need is love
Beatles Eight Days a Week
Beatles Eleanor Rigby
Beatles Got to Get You Into My Life
Beatles Hello Goodbye
Beatles Here, there and everywhere
Beatles Hey Jude
Beatles I Feel Fine
Beatles If I Fell
Beatles In My Life
Beatles Lady Madonna
Beatles Let It Be
Beatles Michelle
Beatles Norwegian Wood
Beatles Paperback Writer
Beatles Penny Lane
Beatles Strawberry Fields Forever
Beatles The Fool on the Hill
Beatles Tomorrow Never Knows
Beatles When I’m sixty four
Bernstein Maria
Blur Universal
Carpenters Goodbye to Love
Carpenters Solitaire
Carpenters Superstar
Carpenters (They Long to Be) Close To You
Carpenters Yesterday Once More
Clapton Layla
Clapton Wonderful Tonight
Coldplay Clocks
Coldplay Viva la Vida
Coldplay Yellow
Coleman Big Spender
Collins A Groovy Kind of Love
Collins & Leigh Cock Linnet
Conti For your eyes only
Costello She
Craig Armstrong PM Love Theme
Donaldson Makin’ Whoopee
Elbow One Day Like This
Ellington Caravan
Ellington Don’t Get Around Much More
Ellington In a Sentimental Mood
Ellington Satin Doll
Evans Without You
Foo Fighters Learn To Fly
Fox Killing Me Softly with his Song
Gay Leaning on the Lamppost
Gershwin But Not for Me
Gershwin Embraceable you
Gershwin He Loves and She Loves
Gershwin I Got Rhythm
Gershwin It Ain’t Necessarily So
Gershwin Liza
Gershwin Love is here to stay
Gershwin Mine
Gershwin Someone to watch over me
Gershwin Summertime
Gershwin The man I love
Glover-Kind I Do Like to be Beside the Seaside
Henley Wind Beneath My Wings
Horner Titanic
Houston Greatest Love of All
Howard Fly Me to the Moon
Jackson Smooth Criminal
Jobim Desafinado
Jobim The Girl from Ipanema
John Candle in the Wind
John Goodbye Yellow Brick Road
John Your Song
Johnsson Pennies From Heaven
Joplin Country Club
Joplin Ragtime Dance
Joplin The Entertainer
Joplin The Easy Winners
Joplin The Chrysanthemum
Joplin The Favorite
Joplin Cleopha
Journey Don't Stop Believin'
Kamen (Everything I Do) I Do it for You
Kanda New York, New York
Keating Tango (Habanera)
Kern Smoke gets in your eyes
Killers Mr. Brightside
Killers When You Were Young
King Stand By you
Legrand What are you doing for the rest of your life
Lennon Imagine
Lerner/Loewe Get Me To The Church On Time
Lerner/Loewe On The Street Where You Live
Lloyd Webber All I ask from you
Lloyd Webber Don’t Cry for me Argentina, from Evita
Lloyd Webber I don’t know how to love him
Lloyd Webber Love Changes Everything
Loewe Get me to the church on time
Loewe I could have danced all night
MacColl The First Time I Ever Saw Your Face
Madonna Crazy For You
Mancini Baby Elephant Walk
Mancini Charade, theme song
Mancini Moon River
Mancini Song from ‘10’
Mancini Song from ‘10’
Mancini Molly Maguires, theme song
Martin That's Amore
McConnel Collection of Cornish Folk tunes
Menke A Whole New World
Menke Tale as old as time
Metallica Nothing Else Matters
Morrison Have I told you lately
Morrison Moondance
Nat King Cole Let's Face the Music and Dance
Nat King Cole Unforgettable
Nirvana Come as You Are
North Unchained Melody
Oasis Whatever
Oasis Wonderwall
Orbison Pretty Woman
Piaf Le Vie En Rose
Porter Anything goes
Porter Every Time We Say Goodbye
Porter I Get a Kick Out of You
Porter Just One of Those Things
Porter Lets do it
Porter Night and Day
Porter What is This Thing Called Love?
Porter You’re the Top
Poulton Aura Lee (Love me tender)
Pretenders I’ll Stand By You
Queen Crazy Little Thing Called Love
Radiohead Karma Police
Rice & Ulvaeus I know him so well, Chess
Robbie Williams Angels
Rodgers Bewitched, Bothered and Bewildered
Rodgers My funny valentine
Rodgers Selection from Sound of Music
Ros Hoppipolla
Schonberg I dreamed a dream, Les Miserables
Shearing Lullaby of Birdland
Sherwin A Nightingale Sang in Berkley Square
Simon Bridge Over Troubled Water
Sinatra Come Fly With Me
Sinatra Love and Marriage
Snow Patrol Chasing Cars
Sondheim Send in the clowns
Speckert Folk Fiddle tunes
Speckert Cowboy Songs
Strayhorn Chelsea Bridge
Strayhorn Take the ‘A’ Train
Suessdorf Moonlight in Vermont
Take That Greatest Day
Traditional English Country Gardens
Traditional Happy Birthday Variations
Traditional La Paloma
Traditional Londonderry Air
Traditional Mexican Hat Dance
Traditional Swing Low Swing Charriot
U2 Beautiful day
Valens La Bamba
Various Tangos
Verve Bittersweet Symphony
Warbeck Pellagia's Aria (Captain Corelli's Mandolin)
Warren I only have eyes for you
Weiss What a wonderful world
Weiss-Peretti Can’t help falling in love
Wet Wet Wet Love is All Around
Wilson Wouldn’t it be nice
Wonder Signed Sealed and Delivered
Young When I Fall In Love

The Nero are based in Birmingham. See Pricing for details of travel costs, etc. 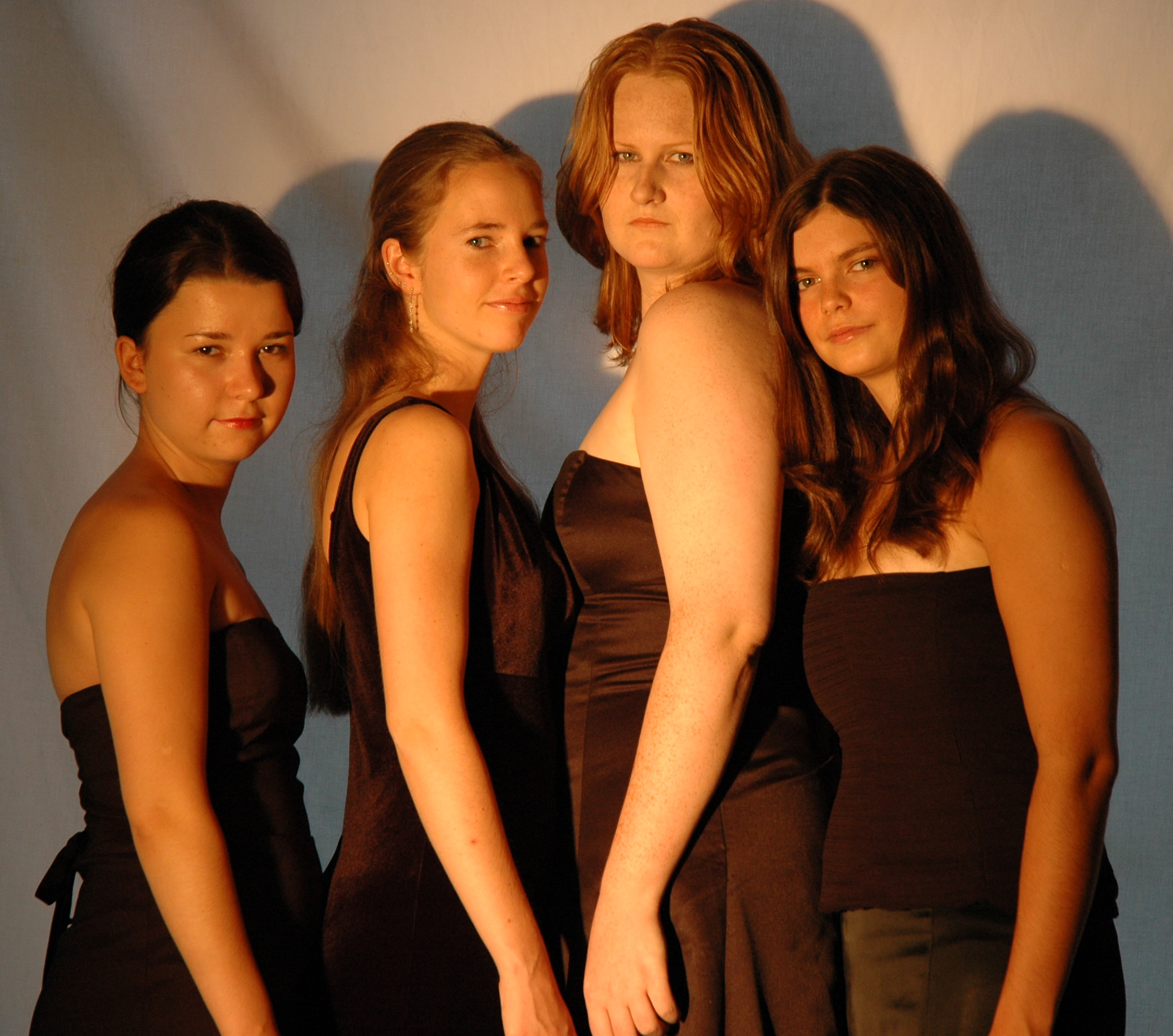 "Their performance during the ceremony was perfect, exactly what we were looking for especially with the mix of classical music and pop songs. Unfortunately during the cocktail reception I was whisked away for photos so I did not get to enjoy listening to more of their music!"
Adam de Smith - wedding reception - Buckinghamshire - July 2015

"Thank you for playing so beautifully at our wedding ceremony and reception. You really helped to set the atmosphere on the day."
Sarah Murphy - wedding reception - Gloucestershire - July 2011

"We were very happy with The Nero String Quartet - they played beautifully. We were also grateful that the organisation of the booking was so straightforward as we made the decision relatively late."
Zoe Purvis - wedding reception - Oxfordshire - September 2010

"We were very pleased with the Nero String Quartet's performance during our ceremony and drinks reception - thank you!"
Kate Beddis - wedding reception - Staffordshire - August 2009

"Just a note to thank you for the fantastic service you provided on Saturday. It was lovely listening to you play, and thanks for being flexible about the playing location due to the rain. I would not hesitate to recommend you to future clients."
Kay Carey - client’s wedding reception - West Midlands - July 2008

Got questions, or want to book 'The Nero String Quartet' for your wedding, party or event? Add them to your Enquiry List and then send them a message to check their availability.
Add to My Enquiry List