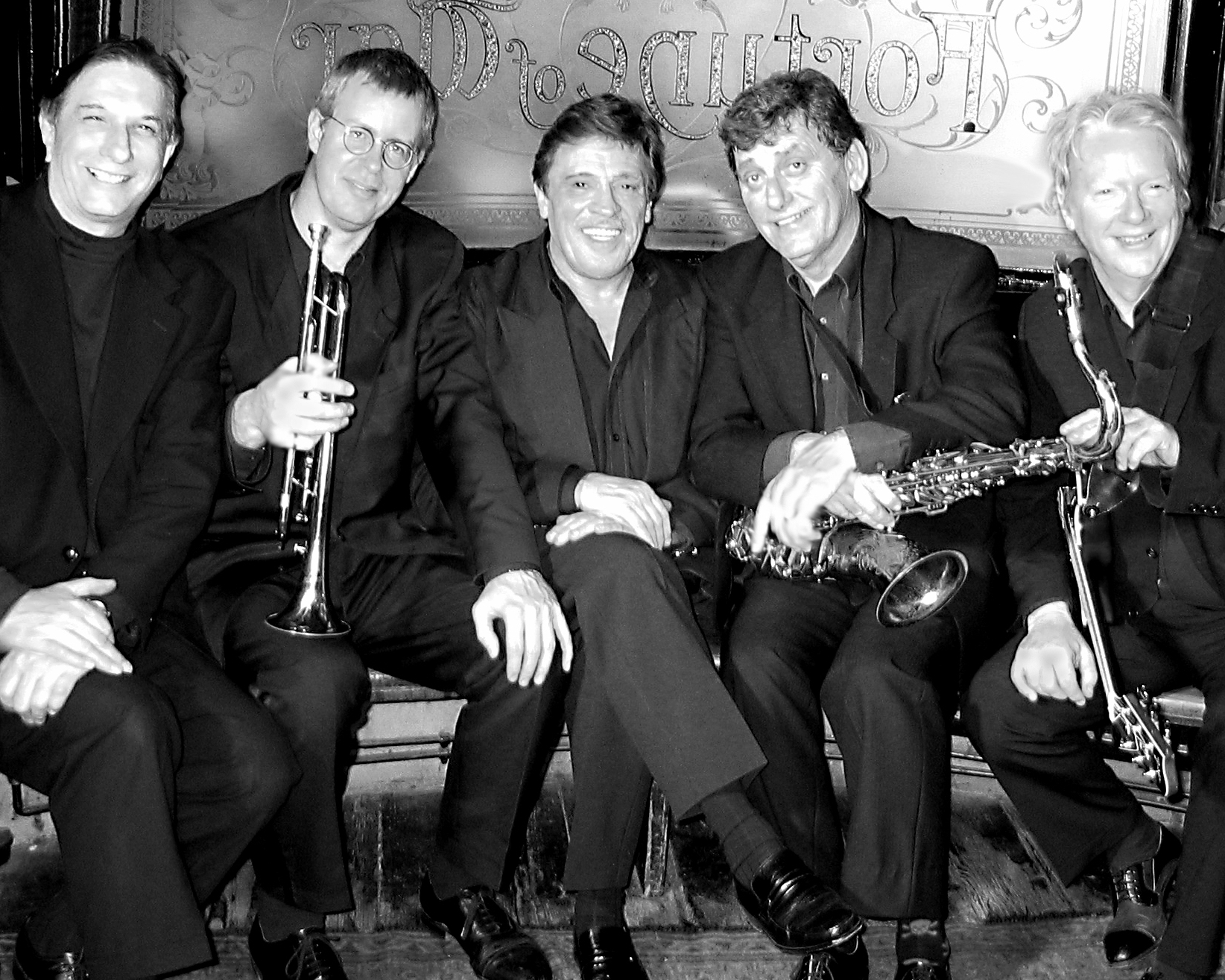 Omnibus Edition are one of those rare bands that can perform both jazz and pop to the highest standard, which is why these musicians were chosen to perform at the 50th birthday celebrations at Highgrove for Prince Charles and several subsequent royal events.

As well as their sheer musicianship, the band’s other great quality is their versatile line-up. Vocals are shared between the guitarist (heard singing on most of the demo tracks), the sax player (providing the vocals on Fly Me To The Moon on their demo), and the keyboard player who also provides the bass lines using pedals. The four-piece line-up is completed with drums, but a trumpet can also be added where required. This means that the band punches significantly above its weight sounding more like a six or seven-piece. This versatility enables the band to cover a huge repertoire of music from ragtime and the roaring 20s up to 21st century hits. On the way there is 30s and 40s swing, 50s Rock’n’Roll and Latin American, Classic 60s pop from the Beatles and the Stones, Soul from Stax and Tamla Motown, and the greatest hits from the 70s, 80s and 90s. Truly an Omnibus Edition of popular music of the 20th and 21st centuries.

The variety of musical styles makes Omnibus Edition the perfect choice for parties where the age range is from five to 95. The band has performed at hundreds of events - small house parties through to grand balls in top hotels – and this experience ensures a wonderful mix with the right music at the right volume and a dedication to keep the dance floor full.

The band provide their own PA and lighting system and usually play a maximum of two-and-a-half hours split into three 50 minute sets over a four-hour stay, plus another hour-and-a-half to set up.

Read More
Songs List:
The band’s repertoire covers a wide range of styles and artists. Here is just a selection of some their most popular numbers.

and many more...
Read More
Add to My Enquiry List

Travel and cost:
Omnibus Edition is based in London. See Pricing for details of travel costs, etc.
Add to My Enquiry List

"They were brilliant and fulfilled the remit perfectly. Our guests have been very complimentary about them. They learnt two new songs to play at our request and both were excellent."
Liz Allen - party - Surrey - November 2012

"Omnibus Edition were so fantastic! They got better and better as the night went on and the dance floor was full with guests of all ages dancing away. We have had so many compliments about the band and we are both delighted that we picked them for our wedding."
Abigail Buckland - wedding reception - Surrey - September 2012

"I wanted to say thank you again, now that the dust has settled, for an outstanding job done by Omnibus Edition last Saturday. I had been a bit worried about how it would work with you having a couple of breaks in the middle of the sessions, but you certainly got everybody back to the dance floor. We lost count of the number of people who remarked on what a great band you were. While you were all fantastic, I particularly enjoyed the sax, which was just outstanding. Please pass our thanks on to the whole band. I hope we will have the chance to use your services again in the future."
Mark Harding - wedding reception - Kent - April 2012

"We had so many comments about how fantastic the band were. They were absolutely amazing!"
Caroline Crosby - wedding reception - Winchester - October 2010

"Absolutely fantastic! Could not have asked for a better performance and learnt our first dance especially for the wedding."
Vashti Nixon - wedding reception - Gloucestershire - September 2010

"They were great - the Aussie contingent also loved the Aussie songs they put on by request. We'd definitely recommend them and also your service - love the web site idea - with so much to organise this meant we could update the info when convenient."
Abbie Clark - wedding reception - Hertfordshire - April 2010

"Function Junction's service was excellent. Most helpful were recommendations about the suitability of the bands available and the correspondence was also excellent. Omnibus Edition were quite simply brilliant, they picked perfect songs and were even able to play our first dance song...thank you very much!"
Rob Kesterton - wedding reception - London - June 2008

"A fun evening had by all."
Charlotte Rockall - wedding reception - West Sussex - June 2008

"I was impressed by every aspect of my dealings with Function Junction. Omnibus Edition were fantastic - I danced all night and have had so many wonderful messages from others who also thought they were excellent."
Amanda Kelly - wedding reception - Oxfordshire - September 2007

"We had already seen Omnibus Edition perform at another wedding and we weren't disappointed when they played at our's. Everyone was up dancing from the moment they started playing and they appealed to all ages from teenagers to grandparents."
Helen Newby - wedding reception - Hertfordshire - July 2007

"Now that we are back from holiday and recovered from the wedding, I am writing to thank you for your most efficient and considerate service in the booking arrangements for Omnibus Edition. The opportunity to hear their music before hand was a great help and logistic planning was excellent. Omnibus Edition played superbly and their contribution to the whole event was tremendous. Our guests loved dancing to their mix of music and we have been showered with compliments about them and the music. All according to Zandy's plan to get young and old to dance! This was "the icing on the cake" of a very happy day. I would be grateful if you would pass these thanks to the band. Needless to say, we have passed your name and that of the band to countless enquiring guests."
Lionel Judd - daughter’s wedding reception - Buckinghamshire - August 2007

"The guys were great again (we saw them play at my sisters wedding before our own). Very accommodating too in terms of our setup times etc!"
Nick Percy - wedding reception - London - July 2007

"Very impressed with service from FJ very helpful. Omnibus Edition were superb and really made our wedding party a success. They were complete professionals and even took it in their stride when the groom borrowed their lead guitar and gave an impromptu performance - they even gave him some musical backing!!"
David Carr - wedding reception - London - March 2007

"We would like to thank Omnibus Edition for making our wedding reception extra special. The quality and professionalism shown by the band was 'top notch'. Guests were extremely complimentary. Paul's mum is a musician and she thought they were superb. We thought that their range and delivery of material was outstanding and ensured that guests not only got on , but stayed on the dance floor!. We would readily recommend Omnibus Edition and would definitely consider them again in the future if the need arose."
Liz Percy - wedding reception - Hertfordshire - May 2006

"We were delighted with omnibus edition and they made a very special night just perfect! Everyone loved the music thank you."
Barbara Toone - party - Kent - June 2006

"Omnibus Edition were absolutely superb and played all the songs we asked for. Our guests haven't stopped commenting on how good the band were and we would definitely book them again for another party, or event."
Suzanne Cleary - wedding reception - Berkshire - November 2005

"We would like to thank everyone at Function Junction and Omnibus Edition for helping to make our day even more special than we could have hoped for."
Toby Joyce - wedding reception - Berkshire - May 2005

"The band were fantastic! We have had tons of comments from all our guests. We will be down to the ... to see them again."
Victoria Fawkes - wedding reception - Essex - October 2004

"Thank you very much for the co-operation and professionalism you showed on Friday. I think you will agree that the party went most successfully and your part in this was very much appreciated. We would hope to be able to engage your services again in future and wish you all the best in your endeavours."
The Deputy Personal Assistant to HRH The Prince of Wales

"Made the day absolutely fantastic, have had many remarks praising the band since, and a couple of people have taken your number!"
Russell McIntyre - wedding reception - Berkshire - May 2004

"Thank you for recommending Omnibus Edition for our wedding – they were an excellent choice, playing music that appealed to all age groups and tempting just about everyone onto the dance floor!"
Caroline Morley - wedding reception - Oxfordshire - August 2004

"I cannot praise Omnibus Edition highly enough - their music was excellent, their attitude was friendly and professional and many of our guests commented on how good they were. I would be very happy to provide references for both Omnibus Edition and Function Junction if requested."
Helen Williams - wedding reception - Surrey - September 2004

Got questions, or want to book 'Omnibus Edition' for your wedding, party or event? Add them to your Enquiry List and then send them a message to check their availability.
Add to My Enquiry List