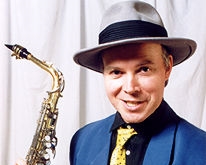 In Brief:
Quoted price for 7-piece with male lead vocals but available in line-ups from 3 to 8 pieces. 2½ hours playing time with recorded music in breaks.
Add to My Enquiry List

About One Jump Ahead

What’s got 14 eyes, 3 horns and loves to party? The answer is a uniquely entertaining band called One Jump Ahead. Playing the irresistible blend of jazz, blues and fun called jump/jive music, they have over 150 songs in their repertoire to get people dancing and enjoying themselves!

With a seven-piece line-up, One Jump Ahead is led by singer, saxophonist and songwriter, Kit Packham, who is joined by some of London’s top jazz professionals on piano, guitar, bass, drums, trumpet and another saxophone. The band plays material ranging from the classic jive music of the 1940s of which the great Louis Jordan was the most famous exponent, through to rock’n’roll, rhythm’n’blues and soul. On the way, the band takes in some classic swing and jazz numbers recorded by artists such as Duke Ellington, Louis Armstrong, Fats Waller, Nat King Cole and Billie Holiday.

Kit Packham’s One Jump Ahead is now accepted as probably the best jump/jive/jazz band in the country and Kit’s three CDs have been widely acclaimed and played on BBC Radio 2, Jazz FM and local radio stations. Press comments include: "Class exponents of the jump-jive oeuvre" (Time Out); "Vigorous jump-jive and R & B" (Daily Express); "London’s most consistent and entertaining jump-jive specialists" (TNT); "…tight jazzy arrangements … the band impresses with some stylish playing" (Highly Strung).

Not surprisingly, One Jump Ahead is an extremely popular band for weddings, parties, corporate events and receptions of all kinds. As Kit puts it: "We have wowed audiences from Islington to Israel, Clerkenwell to County Cork and from Docklands to Deustchland!" The infectious rhythms, humour and style of the band is great for breaking down barriers and getting audiences of all ages on the dance floor, and during quieter moments the band also has the flexibility to provide cool, jazzy background music. The band normally plays for two to three hours and brings its own professional PA system, through which they can also play CDs during their breaks. Our quoted price is for the seven-piece line-up, but a smaller or larger band can be put together by special request.

Read More
Songs List:
Mainstream Jazz
Ain’t Misbehavin’
All Of Me
As Time Goes By
Baby, Won’t You Please Come Home
Beyond The Sea
(The) Blues Is In My Blood
Caravan
Don't Get Around Much Any More
Fever
Harlem Nocturne
Hello Dolly
Honeysuckle Rose
I Can’t Get Started
I Can’t Give You Anything But Love
It Don’t Mean A Thing
In The Mood
Java Jive
Jumpin’ At The Woodside
(A) Kiss To Build A Dream On
Last Time I Saw Jeanine
Lester Leaps In
Manhattan
Moonlight Serenade
My Baby Said Yes
(A) Nightingale Sang In Berkeley Square
Nutella The Hun
On The Shady Side Of The Street
On The Sunny Side Of The Street
Pennies From Heaven
Pennsylvania 6-5000
Red Top
Seven Come Eleven
Stompin’ At The Savoy
Summertime
S’wonderful
T’aint Nobody's Bizness If I Do
Take The A Train
Tenor Madness
They Can’t Take That Away From Me
Until The Real Thing Comes Along
We Are In Love
(A) Wink & A Smile
Worksong

Jump/Jive
Ain’t Nobody Here But Us Chickens
Ain’t That Just Like A Woman
Barnyard Boogie
Big Fat Mamas Are Back In Style
Big Ten Inch Record
Bitten By The Jitterbug
Bloodshot Eyes
Busted
Caldonia
Call The Police
Chartreuse
(The) Chicken & The Hawk
Choo Choo Ch’boogie
Closer To The Bone
Couch Potato
Doctor Jump & Sister Jive
Everybody Eats When They Come To My House
Filthy Mcnasty
Five Guys Named Moe
Flip, Flop & Fly
From Top To Toe
Gimme That Wine
Good Mornin’ Judge
Hatchet Man
Hit That Jive Jack
Honey Just Allow Me One More Chance
How Come You Ain’t Rich?
I Don’t Want No Junk Mail
Is There A Doctor In The House
Is You Is Or Is You Aint My Baby
It Should Have Been Me
I Want You To Be My Baby
Jack You Dead
Jumpin’ On The Bandwagon
Jump Jive & Wail
Just A Gigolo/I Aint Got Nobody
Lemonade
Let The Good Times Roll
My Baby Just Cares For Me
One Jump Ahead
Reet Petite & Gone
Rhythm With My Blues
Romance Without Finance
Saturday Night Fish Fry
Straighten Up & Fly Right
Sure Had A Wonderful Time Last Night
Sneaky Pete
Tarmac Jack
Three Handed Woman
When I Was In France With Frances
You Oughta Steer Clear Of The Water

“Rat Pack” & Similar
Ain’t That A Kick In The Head
Bad Bad Leroy Brown
(The) Best Is Yet To Come
Come Fly With Me
Everybody Loves Somebody Sometimes
Fly Me To The Moon
For Once In My Life
(The) Girl From Ipanema
Have You Met Miss Jones
I Love Paris
It Had To Be You
I’ve Got You Under My Skin
(The) Lady Is A Tramp
Let There Be Love
Let’s Face The Music & Dance
Love Is Here To Stay
Mack The Knife
Makin’ Whoopee
Mr. Bojangles
New York, New York
Night & Day
Satin Doll
Strangers In The Night
Sway

Jazz Ballads
Every Time We Say Goodbye
Gee, Baby, Ain’t I Good To You
Georgia On My Mind
I Ain’t Got Nothin But The Blues
Moon River
My Funny Valentine
Round Midnight
Sad Times. Co. Uk
True Love
Unforgettable
We Have All The Time In The World
What A Wonderful World

Rock & Blues Ballads
Have I Told You Lately That I Love You?
I Cant Help Falling In Love With You
I Missed My Turning
I Put A Spell On You
I Will Not Be Your Fool
Lets Stay Together
Need Your Love So Bad
Night Train
(A) Perfect Day

Travel and cost:
One Jump Ahead is based in London. See Pricing for details of travel costs, etc.
Add to My Enquiry List

"We liked the thoughtful way they related their songs to the event and location they were playing at. They also did a great job of judging the mood and encouraging people onto the dance floor."
Mark Harding - daughter's wedding reception - Kent - February 2013

"One Jump Ahead were fantastic, they hit the right tempo to get all ages up and dancing at our wedding which created such a wonderful atmosphere of celebration. So many compliments on the band - we couldn't have asked for better!!"
Kelly Grainger - wedding reception - Surrey - January 2012

"Many, many comments from guests at the wedding praising the group. The bride has gone as far as to ask me to seek out a cd of their music! Thank you to the whole group."
Lindsay Green - daughter's wedding reception - Warwickshire - June 2010

"Just a quick note to thank you for your help in securing One Jump Ahead to play at our wedding. Could you please pass on our thanks to the band? They were absolutely fantastic, and many guests commented on how good they were."
Gemma Robinson - wedding reception - London - October 2010

"What a performance you put in at our wedding ... We wanted to say a big thanks because you guys managed to pack out the dance floor all night long. Nearly all the guests remarked on how great the band was & everyone got up to boogy, including my 80 year old great aunt! Many felt that you 'made' the wedding. So thanks again, we will be absolutely recommending you to anyone looking for a band for any occasion."
Caroline Jones - wedding reception - Oxfordshire - December 2009

"The band were fantastic, they really added to the day and helped our wedding become everything we hoped for! Thanks."
Richard Smart - wedding reception - Lincolnshire - September 2009

"Thoroughly enjoyed the performance - One Jump Ahead made our wedding reception! Generally excellent and will definitely be recommending you to others!"
Pete Flemming - wedding reception - Northamptonshire - May 2008

"One Jump Ahead were excellent (even a member of the bar staff commented on their quality!) Guests enjoyed dancing to their music, which enhanced the general theme of the evening - Hollywood Glamour."
Anne Buchanan - daughter's wedding reception - Surrey - February 2008

"They were totally brilliant, completely helped to make our day perfect. This was despite us running late and often quite dodgy electrics!"
Zoe Steed - wedding reception - Essex - August 2007

"Fantastic! We've had lots of comments about how great they were, and a wonderful service from Function Junction - prompt and professional - thank you"
Mr & Mrs Wilson - daughter's wedding reception - Berkshire - June 2007

"All our guests kept asking where we had got them from - they were fantastic - judged their performance accordingly to the audience very well. Friendly and good fun - I would book them again for a party. Please pass on our thanks to them."
Mandy Cossins - wedding reception - Suffolk - January 2005

"The band were perfect - the dance floor was packed all night. From start to finish Function Junction were helpful and professional. We've recommended both to all our friends."
Elise Shearing - wedding reception - London - November 2004

"Everybody loved them, they had everyone dancing, did requests and played all night!"
Lucien Howlett - wedding reception - London - August 2004

"The Band were excellent. They played the type of music we had requested and tailored their numbers to the guests' response so that the dance floor was well occupied by young and not so young. Flexible and sensitive to the audience - a great success, and nice people too!"
J & Dr B Salt - daughter's wedding reception - London - October 2003

"The band were excellent, everyone was dancing and I would recommend them to anyone."
Linda Fitz-Gerald - daughter's wedding reception - Surrey - September 2003

Got questions, or want to book 'One Jump Ahead' for your wedding, party or event? Add them to your Enquiry List and then send them a message to check their availability.
Add to My Enquiry List