Shine are a brilliant five-piece band playing a blend of classic pop and party tunes, covering artists such as Duffy, Estelle, The Scissor Sisters, Take That, Amy Winehouse, Bon Jovi, Abba, Wham, Katy Perry as well as The Rolling Stones and The Beatles, etc. The band have provided a superb blend of musical quality and entertainment for over ten years, and the members are all highly experienced professional musicians.

Vocalist Deborah has appeared on ITV’s Stars In Their Eyes, as critically acclaimed vocalist K D Lang. She impressed the producers so much that she was invited to appear in their Christmas special, dueting with Andy Bell of Erasure. Guitarist Nigel, described by Classic Rock magazine as an ‘undiscovered genius’, has played on countless recording sessions for Joe Cocker, 911, B*witched and recently toured with Elkie Brooks. Nigel also provides the band with a third lead vocal and harmonies. Bass Player Nathan, brother to Level 42's Mark King, adds another dimension to the band with his distinctive lead vocal and strong harmonies. He has toured and recorded with It Bites, Francis Dunnery, Heather Small, Errol Brown and Rick Astley. He also plays guitar in the current line up of Level 42. Keyboard Player Jem’s superb skills make him a much sought after musician, and he has played and toured with many names, including the legendary Rolf Harris, FM and UFO. Drummer Paul has played with many great musicians over the years. He also managed to survive recording and live performances with bad boy footballer and Hollywood superstar Vinnie Jones!

Shine have played numerous weddings, private and corporate functions for clients such as Boots, HSBC bank, Levi and the British Heart Foundation, and have performed at prestigious venues including Hampton Court, The Dorchester, Brocket Hall, The Reform Club, Café Royal, Waddesdon Manor, Leeds Castle, Kensington Roof Gardens, Sandhurst Academy, Inner Temple and Ascot Races. The band usually play for two hours divided into two or three sets, but are flexible and happy to meet with your requirements. As well as PA and lights Shine can play recorded party music through their professional sound system before and between their sets if required, and with enough notice, can produce a party mix of your choice.

Shine are based in Buckinghamshire. See Pricing for details of travel costs, etc

"All our guests commented on how good the band were, including two professional sound engineers. We really enjoyed the act on the night."
Katherine Wellings - wedding reception - Buckinghamshire - June 2013

"We have had nothing but praise from our guests at our wedding reception for the fantastic performance presented to us by Shine the vocals were excellent and they interacted with our guests to make our evening perfect. I look forward to hiring them again."
John Bowerman - wedding reception - Buckinghamshire - March 2012

"Shine were superb! We received great feedback from our 352 guests and the mix of music was spot on and suited all ages at the ball from 25-65. The three sets worked very well and personally I thought their 3rd set was their best."
Kirk Rogers - ball - Buckinghamshire - June 2011

"Shine were fantastic! Not only on the day but in all communication in the lead up to the big day. The music and singing were excellent and everyone was up dancing and singing all night!"
Hollie Sevenoaks - wedding reception - Hertfordshire - August 2010

"We really took Shine out of their comfort zone this year by getting them to perform on the round to 3,500 audience. They not only stepped up to the challenge but leapt clean over it, they were absolutely brilliant and as usual went down a storm with our audience, 3 years in a row, must prove something."
Paul Kennie - client’s event - Coventry - June 2010

"Shine made our evening reception shine as much as the daytime sun!! We had the perfect wedding day and all our guests from 9 years old to 80 years old loved them. Thank you."
Cath Jones - wedding reception - Buckinghamshire - April 2010

"Shine were absolutely fantastic and really helped make our night the success it was. All of our guests have asked us where we found them as they were so impressed. I contacted the band several times before our wedding with changes and additional requests and Deborah was so flexible and happy to help. We would not hesitate to recommend both Shine and Function Junction or to use them again."
Gemma Donnelly - wedding reception - Oxfordshire - April 2010

"Shine were great and all my guests were asking how I had found them or where I had heard of them. I would happily book them again or recommend them."
Lara Parish - wedding reception - Buckinghamshire - June 2009

"Another pair of fantastic performances from Deborah and the band. They went down a storm on both nights showing what true professionals they are."
Paul Kennie - Client's event - Nottinghamshire - March 2009

"Shine were absolutely brilliant - they really made the party. All our guests commented on how good they were. We really couldn't have asked for anything more from them - thank you!"
Emma Caygill - wedding reception - London - March 2009

"Just to say thank you so very much for being totally fabulous at our wedding. You were all tremendous and really kept everyone up on their feet. We had a brilliant day and everyone thought Shine were great. Thanks once again."
Fiona Harvey - wedding reception - Essex - February 2009

"Shine were amazing, they made our wedding party a "night to remember". People were queuing to get on the dancefloor! I was still dancing for days after! Thank you so much!"
Kim Brewer - wedding reception - Surrey - December 2008

"Shine was very popular with our guests, who filled the dance floor all evening. Several commented on their professionalism. We also found them extremely nice people to deal with."
Andrew Gordon-Stewart - daughter’s wedding reception - Northamptonshire - December 2008

"John and I thought they were superb at out wedding on 15th November and we have had endless messages from friends and family about how great the band were. They really made our night exceptionally spectacular"
Victoria Roper - wedding reception - Somerset - November 2008

"The band were fantastic, played an excellent selection of music and got everyone up dancing"
Edwina Falls - wedding reception - Hampshire - October 2008

"Shine were fantastic! They were extremely professional, friendly and just amazing on stage. Guests commented all night about how good they were. They really made our wedding reception! Thank you Shine! We would highly recommend Function Junction and Shine to anybody planning their wedding reception."
Emma Hulls - wedding reception - Kent - October 2008

"Excellent service from Function Junction from start to finish. Shine were brilliant - we received so many comments about how great they were from our guests and the dance floor was always full."
Helen Atkinson - wedding reception - Oxfordshire - September 2008

"Please pass on our thanks to Shine. They were fantastic. Everyone said how good they were."
Sharon Jackson - PTA fund raising ball - Hertfordshire - October 2008

"Shine were excellent! We had so many compliments about them from our guests…I will be recommending them to friends. They were friendly, professional and had all ages up dancing. Many thanks!"
Juliet Hutchings - wedding reception - Surrey - July 2008

"The band were fantastic and the dance floor was nearly full the whole night…..A massive thank you to them from bride, groom and families."
Michael Meyrick - daughter’s wedding reception - Surrey - October 2007

"The band had a great sound, very professional who always had the audience up dancing. Fantastic!!"
Steven Laird - wedding reception - Hampshire - August 2007

"Shine were superb, the dance floor was jumping from their 1st note to there last. Thank you!"
Emma Lark - wedding reception - Kent - August 2007

"The band were absolutely fantastic. Many guests have commented on how much they enjoyed their performance – even the barmen were dancing!"
Sarah Hale - wedding reception, - Berkshire - December 2006

"Deborah was very helpful pre wedding day and accommodating re music selections. The band were fantastic - some guests said they were the best wedding band they'd ever heard! Thank you Shine! It was fabulous!!"
Alison Tomkins - wedding reception - Buckinghamshire - July 2006

"Thank you so much for a smooth and very successful event. The band was fantastic and we received a lot of very positive feedback. Deborah and the guys were brilliant. Everyone was dancing all night, the dance floor was never empty. We would definitely book Shine again, and would have no hesitation in recommending them. Please pass on our thanks and best wishes to them. We were all extremely pleased. An excellent evening was had by all. Once again thank you very much and we look forward to working with your company again."
Debbie Phillips - ball - Hertfordshire - July 2006

"The band really were excellent. We have had many comments from guests at our wedding about how fantastic the band were. The dancefloor was packed all night."
Jane Smart - wedding reception - Warwickshire - April 2006

"What more can I say? Shine were truly professional and did everything possible to make our party go with a swing."
Howard Hughes - birthday party - Buckinghamshire - March 2006

"Very pleased all round. Thank you for your contribution to a special day."
Terry Vanpoortvliet - wedding reception - Oxfordshire - July 2005

"The band were superb, got the crowd going very well and kept them interested and dancing throughout. I would definately choose them again"
Jeni Cantle - Works party - Berkshire - December 2004

"They were brilliant! Thank you so much! I would have no hesitation in recommending them."
Ingrid Lloyd - wedding - London - September 2004

"Deborah and the band were fantastic all our guests have commented how brilliant they were. We were so pleased they were able to learn to play our first dance. They made our evening."
Claire Martin - wedding - London - June 2004

"Shine was absolutely brilliant and got everyone up dancing."
Sharon Wei - wedding - London - May 2003

"Thank you so, so much for adding to our perfect wedding. Shine were fantastic and we would love to have you at every party we have from now on… Shine got everyone dancing and all our friends said that it was the best wedding that they had ever been to. What a party. Shine, you are brilliant, the best band in the world. Thanks for making our day unforgettable!!"
Laura Farr - wedding - Warwickshire - April 2003

"Dear Deborah and the rest of the band (and Function Junction), Just a quick note to thank you not only for keeping those guests jumping, bumping, ducking and diving but as importantly for your efficiency and professionalism."
Jeremy Garson, event co-ordinator - wedding reception - Gloucestershire - 2001

"Shine were superb and without doubt made our wedding reception – everybody danced the night away – please pass on our enormous thanks to them all."
Annabel Rowlands - wedding reception - Gloucestershire - 2001 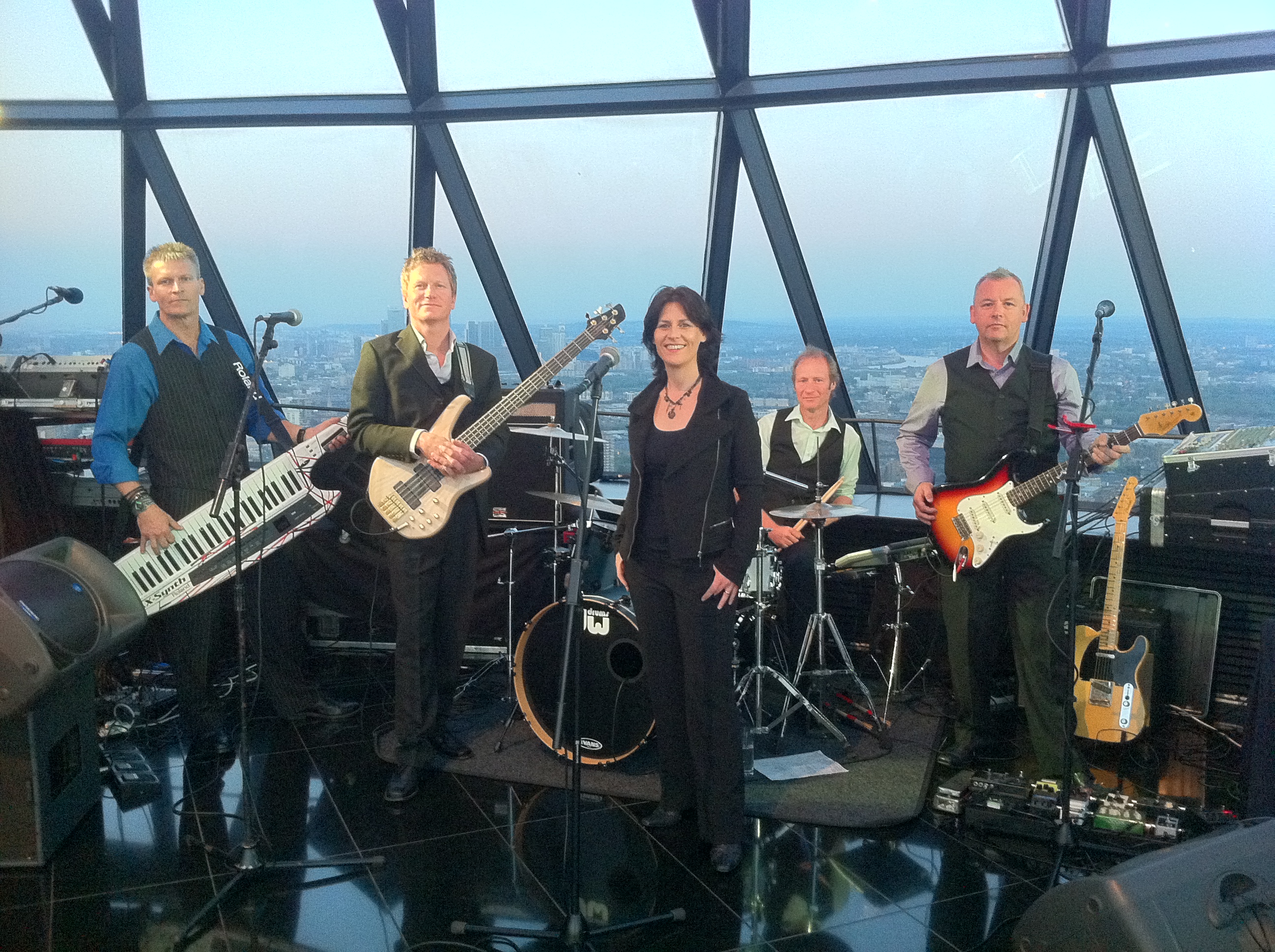