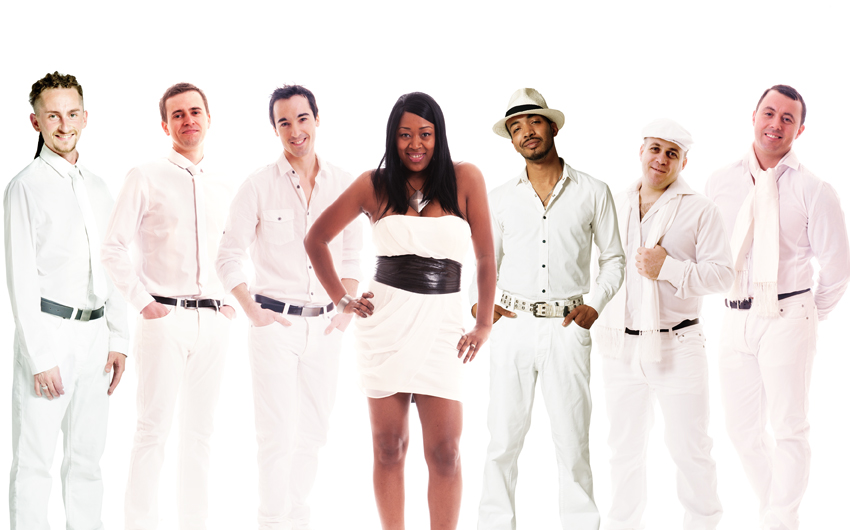 Listen Now
Song List
Prices
Full Description:
Blending timeless funk, soul, rare groove, R&B, acid jazz and disco, the Soul 45's traverse the age of soul classics from James Brown to Jamiroquai. More than that - the band repertoire also features old favourites and current pop hits. The band can perform as a five–piece right up to a twelve-piece band and beyond. Their favourite line-up is an eight-piece consisting of male and female lead vocals, guitar, bass, drums/vocals, keyboard, sax and trumpet, but extra male and female vocalists, a baritone sax and percussion can be added for larger events. Our quoted price is for an eight-piece band.

Boasting some of the best young musicians and singers from the upper echelons of the session world, individually band members have performed with artists including Adele, Taio Cruz, Maxi Priest, Shalamar, Plan B, Larry Graham, Terence Trent D’Arby, Mike Skinner, Jools Holland Big Band and The Miles Davis band and have appeared throughout the UK, Europe and the Middle East alongside successful artists including Rose Royce, Boney M, Jimmy James and the Vagabonds and the late great Edwin Starr. Band members have written soundtracks for Sony Playstation and the film Run Lola Run, and have amassed several musical degrees between them from colleges including the London College of Music and the world renowned Berklee College of Music in Boston, Massachusetts. As a band they have appeared on BBC TV and have played for an elite list of past clients including The Moroccan Royal Family and Manchester City Football Club as well as performing at weddings across Europe and the Middle East.

The band provide a high quality PA and lighting system, and can play background music at no extra charge on iPod/CD before their performance, during their breaks and after the performance. The Soul 45's generally play two one-hour sets, and can play an extra one-hour set for an additional fee if requested. The band can also provide a variety of entertainment options for the earlier part of your function such as a pianist, guitarist or jazz trio/quartet.
Read More
Songs List:
Funk and Soul
Across 110th Street (Bobby Womack)
Ain’t Nobody (Chaka Khan)
All This Love (Gwen McRae)
Are You Ready For Love (Elton John )
Brick House (The Commodores )
Canned Heat (Jamiroquai)
Cosmic Girl (Jamiroquai)
Cramp your style (Breakastra)
Dance to the Music (Sly and the Family Stone)
Get Up Of Dat Thing (James Brown)
Give me the Night (George Benson)
Give Up the Funk (Tear the Roof off the Sucker) (Parliament)
Got to be Real (Cheryl Lynn)
Hard To Handle (Otis Reading)
Harvest for the World (Isley Bros)
I feel Good (James Brown)
I Found Lovin (Fat Back Band)
I Heard it Through the Grapevine (Marvin Gay)
I Say a little prayer (Aretha Franklin)
I wish (Stevie Wonder)
I’m a Love Man (Otis Reading)
I’m a Love Man (Otis Reading)
If You Want me to stay (Sly and the Family Stone )
It’s a Shame (Detroit Spinners)
Let’s Get It On (Marvin Gay)
Let’s Stay Together (Al Green)
Long Train Running (The Dooby Bros)
Love fool (Jamiroquai)
Master Blaster (Stevie Wonder)
Midnight Hour (Wilson Picket )
Move On Up (Curtis Mayfield)
Mr Big Stuff (Jean Knight)
Never Give Up (George Benson)
Never too Much (Luther Vandross)
Night To Remember (Shalamar)
Papas Got a Brand New bag (James Brown)
Pass the Pea’s (Macio Parker )
Peg (Steely Dan)
Pick up the Pieces (Average White Band)
Play That Funky Music (Black Cherry)
Rescue me (Fontella Bass)
Respect (Aretha Franklin)
Rock Steady (Aretha Franklin)
Sex Machine (James Brown)
Sign Sealed Delivered (Stevie Wonder)
Sir Duke (Stevie Wonder)
Somebody Else’s Guy (Jocelyn Brown)
Soul Man (Sam and Dave)
Soul With A Caprital S (Tower of Power)
Street Life (The Crusaders)
Super Freak (Rick James )
Superstition (Stevie Wonder)
Sweet Soul Music (Arthur Conley )
There's Only So Much Oil On The Ground (Tower of Power)
Think (Aretha Franklin)
Turn on Tune in Cop out (Freak Power)
U R the Universe (Brand New Heavies)
Who’s That Lady? (Isley Bros)
X-Press Yourself (Charles Wright)

Travel and cost:
Soul 45's are Surrey-based. See Pricing for details of travel costs, etc
Add to My Enquiry List

"The band were absolutely fantastic, everybody loved them and the music they played. All the band members were really nice and flexible, as we were a bit late getting them to play as things ran on a bit, but it was no problem for them. I would definitely recommend them to anybody looking for a band."
Anna Collinson - wedding reception - Lincolnshire - September 2011

"I saw this band at a friend's wedding 3 years ago and vowed that if I ever got married I would have them at mine too. I did and they were better than I remembered. They had the dancefloor filled from start to finish with a brilliant mix of funky songs (not an ounce of cheese!!). They were simply brilliant."
Dominique Spurr - wedding reception - London - May 2011

"The band were excellent! They are fantastic musicians and singers who made our wedding reception go with a bang! We really feel they added that extra something to our day and couldn't have hoped for a better band."
Laura Pearce - wedding reception - Kent - July 2008

"Function Junction is an excellent service - would use again. The band - they went beyond expectations, they sounded better live than they did on cd (which is very difficult!) Great time had by all - would definitely consider using them again. They didn't even mind our own, very bad, renditions of a couple of songs!"
Joanne Gibbs - wedding reception - Gloucestershire - May 2008

"We had such an amazing day, and the band were fantastic. The dance floor was packed all night. We had so many comments from guests about how fantastic they were. Thank you so much!!"
Susan Button - wedding reception - Kent - August 2007

"The band were absolutely outstanding - the performance was fantastic, all our guests danced all night! I would recommend them and Function Junction to all my friends and would definitely book with you again in the future. Thank you for a truly wonderful evening."
Adele Fitzpatrick - wedding reception - Kent - July 2007

"The band was absolutely brilliant. The dance floor was full all night. A number of people have asked for their details for upcoming events. Please pass on to them our huge thanks for making the wedding night a great success."
Susan Boddy - wedding reception - London - July 2007

"Many thanks for such a professional and high quality performance. Many guests commented on very high quality of band and asked for contact details. Highly recommended both the band and Function Junction"
Tom Pauk - wedding reception - Suffolk - February 2007

"I can’t begin to tell you how great the band were. They made the evening. The two lead singers were so professional, and seemed to get the mood of the party. We had so many positive comments about them. Please send them our thanks."
Lisa Riddick - birthday party - London - February 2007

Got questions, or want to book 'Soul 45's' for your wedding, party or event? Add them to your Enquiry List and then send them a message to check their availability.
Add to My Enquiry List