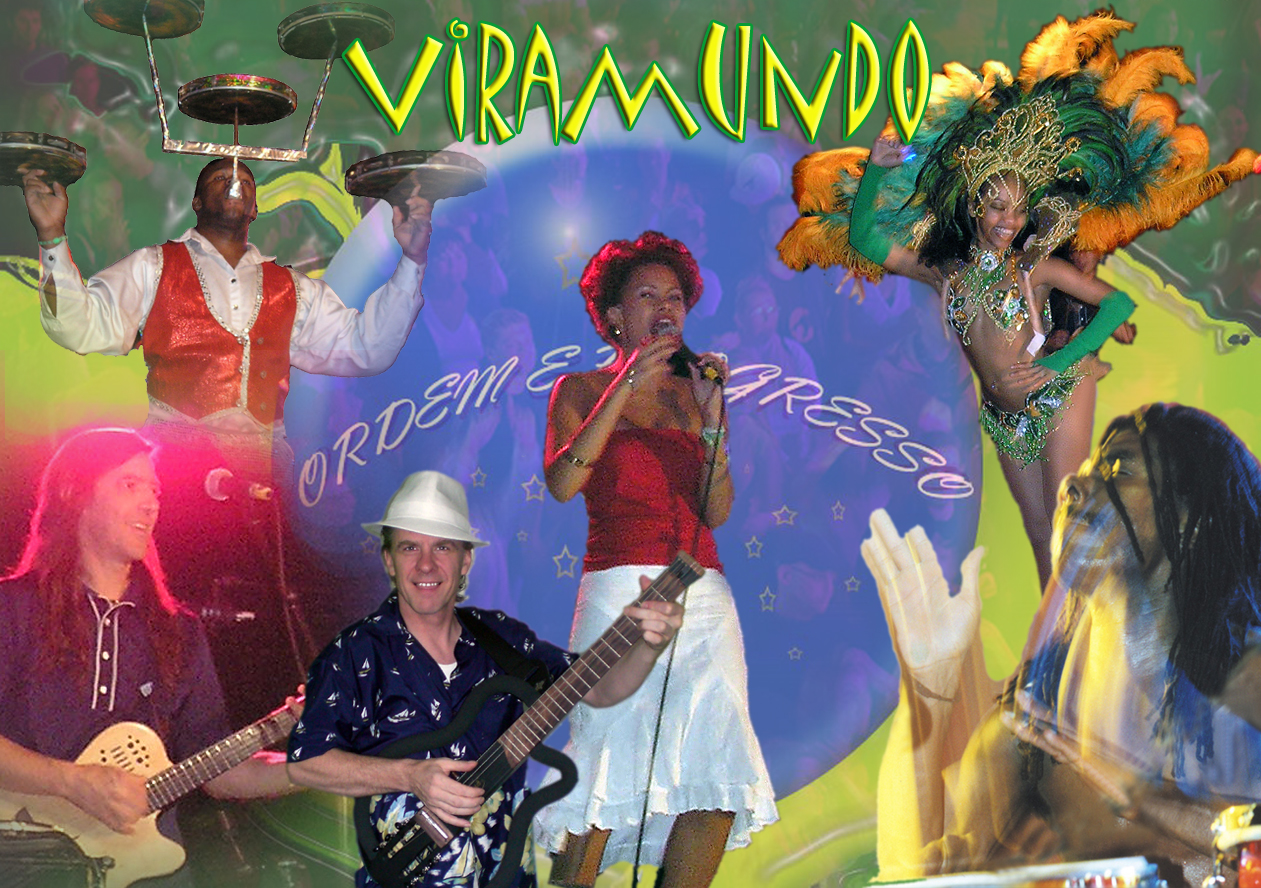 Supercharged with all the excitement of the Rio carnival, Viramundo are a Latin dance band specialising in Brazilian samba school music with the added bonus of being able to play some gentler acoustic-style bossas and cool Brazilian jazz. For the larger shows, the band get the authentic carnival sound and atmosphere by adding extra percussion, a horn section, flute, mandolin, and the finest Brazilian dancers, and this 10-piece line-up is the one featured on our demo CD, but they also perform as a six-piece group which is perfect for smaller parties such as weddings or private celebrations. This line-up features Brazilian female vocalist Beatriz Silva, backed by piano/keyboards, drums/vocals, percussion/vocals, bass and guitar/cavaquinho/vocals.

Viramundo have appeared on Big Breakfast TV, Good Morning with Richard and Judy, London Tonight, and Talk Sport, and the Viramundo dancers have appeared twice on the BBC's Generation Game, and were also featured on an interactive CD from Peter Gabriel's Real World Company. The band have also played a wide range of engagements including charity balls for Friends of the Earth, Greenpeace, Amnesty International, Target Breast Cancer, Playtex Moonwalk and Task Brasil. Clubs, festivals and other appearances include Henley Regatta, Notting Hill Carnival, Gran-Gran Fiesta, Bar Salsa, Bar Madrid, Bar Tiempo, Bass Clef HQ, The100 Club and numerous university balls and functions at the all the top hotels up and down the country. They played for Madonna when Versace organised a party for the launch of "Evita" in London in December 1996, and when Mick Jagger wanted a Brazilian band for his birthday a few years ago, the band he called first was Viramundo!

Viramundo have their own PA system and normally play three 40-minute sets or two one-hour sets. Like nearly all our bands they can also provide pre-recorded music during their breaks and after the performance has finished at no extra charge. If the dancers are included in the band, they are happy to conduct a dance workshop before the show if requested in advance.

Viramundo are based in London. See Pricing for details of travel costs, etc.

"Just a brief note to thank you and all the band for a fantastic evening on Saturday. Everyone thoroughly enjoyed themselves and thought that Viramundo were excellent. Philippa and I are looking for the next excuse to book you all."
Chris Howell - birthday party - Oxfordshire

"Just wanted to drop you a quick line to express our enormous thanks for playing at our wedding. As you know the vast majority of our guests were professional musicians and huge numbers of them all commented on how fantastic you guys were and where did I come across the band. It was a really important part of the day for Jenny and I and it really couldn't have been any better - it was perfect."
Gerald Gregory - wedding reception - Teeside

Got questions, or want to book 'Viramundo' for your wedding, party or event? Add them to your Enquiry List and then send them a message to check their availability.
Add to My Enquiry List